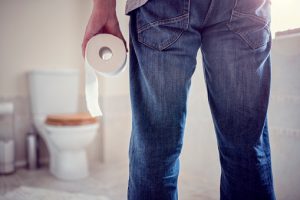 Chronic idiopathic constipation refers to a gastrointestinal health condition in which a person has long-term symptoms of constipation without any identifiable cause, according to commonly used diagnostic testing. The term “idiopathic” is often used in the medical community in reference to a disease or condition that arises spontaneously or from an obscure or unknown cause.

Constipation is defined as having a reduced bowel movement frequency, particularly less than three times per week. Constipation may occur over a short period of time (acute) or last much longer (chronic). Often times, constipation is associated with straining and painful stool excretion. Affected individuals may require manual removal of hardened and impacted stool, which may further lead to injury and bleeding of the tissues around the anus.

It is estimated that as many as 35 million American adults suffer from chronic idiopathic constipation, with only about 12 percent eventually seeking medical attention for their symptoms. This condition is slightly more common in women and adults over the age of 35, with Caucasians being the most affected compared to other races and ethnicities.

The sole reason for labeling this form of constipation “idiopathic” is because there is no identifiable cause, however, there are several possible factors that may be associated with chronic idiopathic constipation. These may include:

Fluid absorption and muscle contraction: Due to a reduction in the contracting muscles found throughout the colon to the rectum. Due to the lack of movement of fecal matter, water from the stools is absorbed in greater amounts, leading the stool to become hard and dry.

Improper diet: Not consuming enough fiber in your diet can lead to chronic constipation. Eating more foods rich in protein and dairy instead is often a significant cause of chronic idiopathic constipation.

Brain and bowel connection: Your entire gastrointestinal system is controlled by an array of nerve cells that relay messages of urgency to defecate to your brain and back. If there are any changes to this nervous symptom, as in the case of nervous system damage, this line of communication can be disrupted, leading to a decreased urge to defecate, abdominal discomfort, and consequently lead to constipation.

Other possible causes of chronic constipation include:

What are the symptoms and risk factors of chronic idiopathic constipation?

Chronic idiopathic constipation symptoms are highlighted by infrequent bowel movements; however, the following may also accompany the diagnosis:

When to see a doctor

As with any serious health condition affecting your quality of life, seeing a doctor will always be in your best interest. The following complications with your bowel movements should prompt you to see your local doctor as soon as possible:

Typically, the history of infrequent bowel moments is enough to suspect some form of constipation. A full medical history will also be taken to help determine the level of bowel movement infrequency and other related symptoms. This will lead to a physical exam of your abdomen and rectum, which will most likely be done to investigate for any kind of obstruction. Once these preliminary steps are done, your doctor will likely choose to do the following tests for further investigation depending on the circumstance. However, to be classified as “idiopathic,” none of these tests will show signs of abnormality.

Blood test: Looking for the signs of infection or checking thyroid function.

Ultrasound: Can give a good indication of the cause and site of your obstipation.

X-ray/CT: imaging studies to get a picture of your obstructed bowels.

Barium enema: Used in combination with an x-ray to get a detailed view of the bowel pathway, looking for obstruction of the dye.

Colonoscopy: Looking directly into the colon with a camera can help see if you have tissue damage. Biopsies may also be taken to be assessed for colon cancer.

Bowel function test: Used to check muscle tone and nerve sensitivity of the intestines and anus.

How to treat chronic idiopathic constipation

Once diagnostic testing has ruled out any potential underlying cause of constipation, therapy can be implemented to remedy the disorder. The following are common methods used for chronic idiopathic constipation treatment.

For severe impaction of feces:

Bulk-forming laxatives: Help to increase the size of stool and soften them to ease passage during excretion. They work by allowing the stool to retain more fluid. Commonly prescribed bulk-forming laxatives include ispaghula husk or psyllium, polycarbophil, methylcellulose, and sterculia. It is estimated that these treatments may take around two to three days to be effective.

Osmotic laxatives: Aims to soften stool by drawing water into the intestines. Lactulose is a commonly prescribed osmotic laxative.

Drink plenty of fluid: Preventing dehydration will ensure your stool remains soft. It is recommended to avoid substances that promote dehydration, such as caffeine and alcohol.

Getting regular exercise: Helps to stimulate the bowel organs and promote gut motility.

Practicing good toilet habits: It is not recommended to ignore the “call of nature” and to go to the bathroom when needed. The best time for passing stool is first thing in the morning or around half an hour after a full meal.

Related: What causes obstipation and how to treat obstructive constipation?

7 reasons for your bloating, gas, and constipation