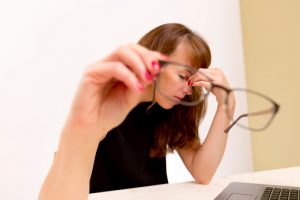 Anterior uveitis is one of four different forms of a disease that causes about 10 percent of blindness cases. While it can be mild and non-threatening for some people, for others, it comes with symptoms that require swift medical attention.

Uveitis falls into one of these categories: intermediate, posterior, panuveitis, or anterior. Here, we outline anterior uveitis. We’ll not only address what anterior uveitis is, but we will look at the symptoms, diagnosis, and potential treatments.

Anterior uveitis is inflammation of the middle layer of the eye, which includes the colored part of the eye as well as surrounding tissue called the ciliary body. When this goes untreated, it can lead to vision loss. When caught early and treated properly, it is possible to keep vision loss to a minimum. Although uveitis can happen to anyone at any age, it mostly impacts people between the ages of 20 and 60.

Acute anterior uveitis is the most common form of uveitis. In one community-based study, anterior uveitis made up more than 90 percent of all uveitis cases. In the United States, the incidence rate is about eight cases per 100,000 people.

There can be complications with anterior uveitis, including glaucoma and cataracts. The following list covers some of the other possible complications:

Signs and Symptoms of Anterior Uveitis

Anterior uveitis signs will be different depending on how severe the condition is and whether or not it is acute anterior uveitis or chronic. Acute uveitis symptoms occur suddenly and develop rapidly. They can last up to three months. Chronic signs develop slowly and continue well beyond three months.

Here are the most common anterior uveitis symptoms:

Anterior uveitis signs can be similar to other eye diseases, so it is important to get a thorough eye examination by a qualified optometrist.

Anterior uveitis diagnosis is really all about zeroing in on the underlying infectious cause or the condition that is leading to the patient’s symptoms. There are a number of tests and procedures that can be used to determine if a person has anterior uveitis and what is causing it.

In some cases, people may show other signs and symptoms aside from the typical anterior uveitis signs. These individuals may undergo other tests, including X-rays, MRI’s, or a lumbar puncture.


Treatment and Prevention of Anterior Uveitis

Early treatment of anterior uveitis is key to preventing complications, including irreversible damage. Anterior uveitis treatment guidelines focus on reducing inflammation and pain as well as addressing the underlying cause to prevent any deterioration of the eye. With proper treatment for anterior uveitis, the chances of recurring problems decrease.

It is important to keep in mind that steroid treatments can include side effects, especially if used long-term. This is something that the patient and doctor should discuss openly so that the risk-benefit ratio can be analyzed.

Preventing anterior uveitis can be difficult; however, the risk can be lowered by avoiding people who have infections as well as wearing protective eye gear—such as industrial goggle—during activities that have the potential to cause eye trauma. It is also important to avoid the risk factors that have been linked to the underlying condition associated with anterior uveitis. Maintaining follow-ups with healthcare professionals who can catch the first signs of recurring uveitis is also important.

It is interesting to note that some studies seem to suggest that recurrent anterior uveitis increases the chances of getting ankylosing spondylitis. A form of arthritis, ankylosing spondylitis or AS, affects the spine by causing inflammation in the vertebrae. It can lead to severe, chronic pain.

In one study, conducted in South Korea, researchers found that the risk of ankylosing spondylitis increased seven-fold following the first bout of anterior uveitis and was increased 17-fold after the second episode. The findings, which were published in Arthritis Care and Research, took into consideration well over 10,000 patients with new-onset anterior uveitis and compared them with at least 52,000 individuals without the condition. The researchers determined incidence rates of ankylosing spondylitis by using the number of uveitis episodes. The incidence rate ratios were based on incidence rate in the control group. The incidence rate per 100,000 person-years of AS after just the first uveitis episode was 121.5 while the control group was just 16.9. After the second episode of anterior uveitis, the rate for the AS group jumped significantly.

The team of medical experts involved in the study has said that identifying “systemic associations in patients with uveitis is important” to determine the cause of eye inflammation, improve visual prognosis, as well as improve the outcome of the systemic conditions.

The researchers believe that since anterior uveitis related to AS often appears as acute, it is usually suspected by an ophthalmologist rather than a rheumatologist. A rheumatologist is the type of specialist that normally treats ankylosing spondylitis and other arthritic conditions.

Whether anterior uveitis is linked to ankylosing spondylitis or some other underlying condition, you still need to identify that you have uveitis and get proper treatment. Thankfully, modern treatment can help control the signs and symptoms of anterior uveitis and is often successful in preventing vision loss.

Related: What is cloudy vision and how to get rid of it?