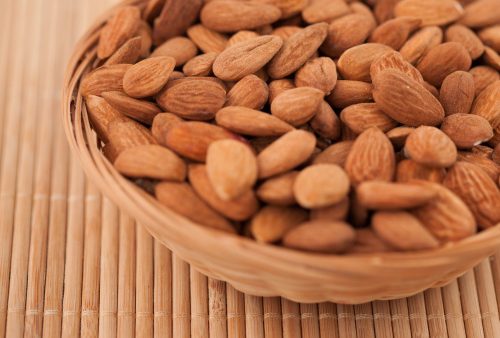 Almonds are not only a convenient bite sized snack, they’re also packed with so much nutritional value that they’ve been coined a super food. Previous studies have found that almonds decrease heart disease risk by keeping blood vessels healthy. They’re also rich in antioxidants and help lower blood pressure.

New research now adds an additional accolade to this health promoting seed (yes, it is technically a seed, not a nut). Eating almonds on a regular basis may boost HDL cholesterol while improving the way bad cholesterol is removed from the body.

We need certain amounts of cholesterol

Cholesterol is a waxy substance that circulates in our blood. It is required by cells, hormones, and even for the process of producing vitamin D. You obtain your cholesterol from the food you eat, which gets processed by your liver. Your liver then distributes it to the areas that need it.

The problem is that we tend to consume more cholesterol than we need, as high amounts are found in the typical western diet.


It is important to have healthy amounts of both LDL and HDL cholesterol.

The researchers wanted to determine how almonds could provide so many beneficial effects in terms of cholesterol metabolism.

Studying a diet with an almond component

The study in question involved 48 men and women with high LDL cholesterol levels who were followed for two six-week periods. Both times, the participants were given identical meals — the only difference was the addition of a daily snack. For the almond diet, participants received about a handful (43 grams) of almonds a day. During the control period, they received a banana muffin instead.

It was found that almonds not only helped increase the level of HDL but also improved its function but 6.4 percent. The ability for HDL to clear bad cholesterol was significantly increased by consuming almonds.

“If people incorporate almonds into their diet, they should expect multiple benefits, including ones that can improve heart health. They’re not a cure-all, but when eaten in moderation — and especially when eaten instead of a food of lower nutritional value — they’re a great addition to an already healthy diet,” Kris-Etherton said.