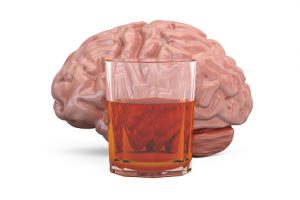 Alcohol and memory loss are very closely related to one another. People who consume excessive amounts of alcohol on a regular basis are more likely than those who only drink moderately to develop early-onset dementia and other cognitive dysfunctions as they get older.

A French study conducted earlier this year showed a strong correlation between people who regularly consume more than the standard amount of alcohol daily (approximately for to five drinks for men and three drinks for women) and the increased risk of permanent brain damage. Continued excessive alcohol consumption can also shave off more than 20 years of a person’s natural lifespan.

People who drank a lot were more likely to have other unhealthy habits such as smoking tobacco and even doing illicit substances. Due to a lack of self-care and consistently poor dietary choices, these people were also at greater risk of developing potentially serious health problems like diabetes, high blood pressure, hearing loss, and heightened emotional issues such as depression and anxiety.

Social circumstances such as lack of a formal education were also associated with forming a strong propensity to imbibe copious amounts of alcohol. Excessive drinking over a prolonged period of time has also been linked to potentially fatal conditions such as Wernicke-Korsakoff Syndrome, which will be discussed in further detail below.

How Does Drinking Affect Your Memory?

As mentioned, memory loss and alcohol use disorder are strongly interconnected with one another. There are two types of memory—retrospective and prospective. Retrospective memory is long-term (spanning your entire life), whereas prospective is short-term (day-to-day memories such as to-do lists or where you parked your car).

Consuming large amounts of alcohol tends to negatively impact your prospective memory (anterograde amnesia) more often than your retrospective memory (retrograde amnesia) as it actively impairs your memory during the period of intoxication. This is known as blacking out and it’s the reason that many people report having limited or no memory of the events that took place during a binge-drinking session.

The hippocampus is an integral structure in the brain that’s primarily responsible for interpreting and storing new memories so that they can easily transition into long-term memories. Constant heavy consumption of alcohol can actively damage this important structure, preventing it from functioning normally.

If you’re wondering what causes you to lose your memory when drinking alcohol and eradicates your inhibitions, it’s the fact that alcohol blocks certain parts of your brain from performing their duties.

It’s a scientific fact that the more alcohol you consume in a short period of time, the less time your body has to metabolize and process the alcohol. Your body’s inability to keep up with the extreme amounts of alcohol entering into your system is what causes intoxication, dehydration, and memory loss

Consuming large quantities of carbohydrates prior to drinking and drinking at a slower pace can help your body absorb the alcohol in your system more easily. Intoxication inhibits your ability to make sound decisions and it also prevents your brain from properly processing and storing new memories, which is why people who binge-drink regularly often have no recollection of the embarrassing things they did the night before.

This can be very dangerous because intoxication typically makes it easier for people to engage in risky behavior and encounter potentially harmful situations. The association between alcohol and short-term memory loss has been proven to have a more significant impact on women than men presumably because of the different biological elements between the sexes. Women are more prone to getting intoxicated at a much quicker rate than men, even if they consume less alcohol.

Alcohol consumption affects everyone differently and years of routine drinking can cause some people to develop a much higher tolerance than others. However, regular heavy or moderate drinkers can experience different types of blackouts, depending on their blood-alcohol levels. Partial blackouts may occur while you’re still conscious, but just intoxicated enough so that you can’t process new information or process new memories; however, you might still be able to retain some information and recollect certain things that happened while you were drunk. Complete blackouts occur when you lose total consciousness and have absolutely no memory of what happened while you were intoxicated, even if people recount it to you when you sober up.

The Effects of Alcohol On Long-Term Memory

Years of abusing alcohol and long-term memory loss are also directly related to other more serious brain disorders and illnesses. Wernicke-Karsakoff Syndrome is one of the most detrimental conditions that heavy drinkers can develop over time.

This disorder is a result of lack of proper nutrition over long periods of time, particularly a severe thiamine, otherwise known as vitamin B1 deficiency. Alcohol itself doesn’t directly impact diminished B1 levels in the brain, but people who suffer from alcoholism typically don’t maintain a healthy diet. The majority of alcoholics tend to favor drinking over doing pretty much anything else, and that includes eating. Consuming large quantities of alcohol on a regular basis can also suppress the appetite, which is another reason that a lot of alcoholics lose obscene amounts of weight in a very short time.

Thiamine is an essential vitamin that helps the brain learn and retain new information and memories. Therefore, an insufficient supply of it can result in permanent or semi-permanent long-term memory loss. The average person typically receives a sufficient amount of thiamine in their diet as it’s a naturally occurring vitamin in most meats.

Researchers are currently working on various strategies to help those who suffer from short and long-term memory loss regain their forgotten experiences. Future Event Stimulation is one of the most promising methods of recovering old memories and aiding in the formation of new ones. The use of making indexed and linked lists helped many people recall specific event-based tasks. However, there was no significant impact on the recollection of time-based tasks.

Another effective method of helping the brain partially repair itself is abstaining from alcohol altogether. Of course, the brain’s ability to repair damages it sustained as a direct result of alcohol abuse depends largely on the extent of the damage incurred.

All in all, moderate consumption of alcohol such as having a glass of red wine with your meal every evening can be quite beneficial to your health. Nevertheless, Oscar Wilde once said, you must do “everything in moderation, even moderation.” Overdrinking on a regular basis can have a severely negative impact on your brain health.

If you’re worried about the effects of your own drinking habits on your brain or those of someone else, then the simple solution is to cut back on your drinking. Always consult your doctor before making any drastic lifestyle or dietary changes.

10 everyday tips to boost your memory

How to slow down memory loss