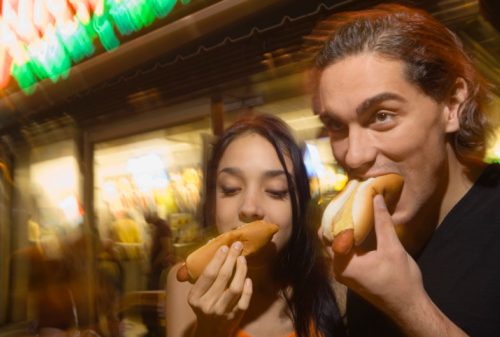 For decades we have been warned that late night eating can lead to weight gain, with the most common explanation being that our will power tends to be lower and we are more likely to consume high calorie junk food in the wee hours of the night. However, scientists have now discovered that late night snacking may increase our obesity risk even if we avoid junk food and worse still, eating before bed can lead to a myriad of harmful health effects.

In 2009 a study done on rats at Northwestern University found that late night eating can lead to significant weight gain, regardless of whether or not that person is counting calories and avoiding junk food. “How or why a person gains weight is very complicated, but it clearly is not just calories in and calories out,” said Fred Turek, professor of neurobiology and physiology in the Weinberg College of Arts and Sciences. “We think some factors are under circadian control. Better timing of meals, which would require a change in behavior, could be a critical element in slowing the ever-increasing incidence of obesity.”

Studies such as this have led scientists to conclude that our body’s internal clock, the one that regulates our sleep-wake cycle, also regulates the way in which our body burns calories and if we eat when we should be sleeping, then our bodies will burn off less of what we consume. The exact reason why our metabolism is less active during the night is unknown however scientist speculates that the genes that control our metabolism are more fully turned “on” during the daytime and therefore able to process energy more effectively.

Recently, Scientists at the Salk Institute for Biological Studies conducted another study pertaining to rats and eating hours, and they found that the rats that only had access to food on a regular eight hour schedule weighed 28 percent less than the rats that had access to food around the clock. In addition to an increased risk of obesity, the scientists also found that around-the-clock eating contributed to high blood sugar levels, increased inflammation, elevated cholesterol, liver damage and motor control problems. “What we showed is under daily fasting the body can fight unhealthy food to a significant extent,” says study author Megumi Hatori. Megumi warns however, that this finding is not a free pass to forgo counting calories and go on a junk food frenzy during the daytime, stating that “there are bound to be limits.”

It appears that aside from an increased chance for weight gain and obesity, the major drawback of eating late at night is that it lessens the amount of time that you are fasting. If you eat your last meal at 6pm for instance, and you don’t eat again until 8 in the morning than your body is allotted a full 14 hours of fasting on a daily basis. This is important because fasting produces innumerable health benefits including: an increased production of both anti-aging and growth hormones, an increase in fat loss, the ability to detoxify harmful substances, a more powerful immune system, and last but certainly not least, there is mounting evidence that fasting increases your overall lifespan. So next time you have a late night food craving, regardless of whether it is for healthy food or junk food, ask yourself if the short-term gratification is really worth ruining the benefits that you can reap from an extended period of nightly fasting.

Foods not to eat