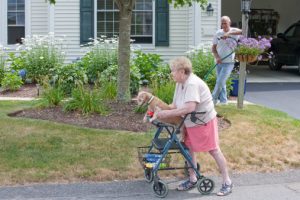 Heart failure occurs when the heart is unable to pump strongly and consistently enough to distribute blood throughout the body to maintain blood flow. It is a fairly common condition said to affect nearly 6.5 million adults.

The risk of heart failure increases as we age. Women are at a higher risk of developing this potentially life-threatening medical condition. Between the ages of 75 and 84, the likelihood of developing heart failure triples compared to women who are 60 to 74.

A new study from the American College of Cardiology has found that walking regularly can reduce the risk of postmenopausal women developing heart failure. Their findings suggest that walking for at least 40 minutes several times per week, at an average to fast pace, can cause a woman’s risk of heart failure to decrease by almost 25 percent. These results were not dependent on body weight or if a woman exercised in addition to the walking.

Somwail Rasla, one of the researchers responsible for the study and a cardiology fellow at Saint Vincent Hospital, was quoted as saying “We already know that physical activity lowers the risk of heart failure, but there may be a misconception that simply walking isn’t enough. Our analysis shows walking is not only an accessible form of exercise but almost equal to all different types of exercise that have been studied before in terms of lowering heart failure risk. Essentially, we can reach a comparable energetic expenditure through walking that we gain from other types of physical activity.”

The study followed over 89,000 women through a ten-year period and examined their walking behaviors and the related health outcomes. The participants were aged 50 to 79 years old at the beginning of the study. The baseline requirements for entrance into the study was being a female who could walk at least one block and was not currently suffering from cancer, heart failure, or coronary disease. The researchers look at the women’s walking frequency, speed, and duration of exercise.

Walking is an exercise that doesn’t require a gym membership or any expensive equipment. All you need are a good pair of shoes and maybe a friend to keep you company. If you are someone who doesn’t like to exercise in groups, walking is a wonderful solitary and contemplative activity as well. These new research findings suggest that nearly every woman can work toward decreasing her risk of heart failure by sticking to a basic walking routine twice a week or more.

Walking over 4,000 steps a day found to improve cognitive ability in adults 60 and older