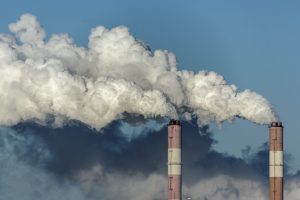 The air you breathe is something that you take for granted, right? It’s there, sometimes a little less than fresh if you’re walking past an idling car, but so it goes…

Here’s the rough news: One in eight deaths around the world has been linked to exposure to air pollution.

According to a World Health Organization (WHO) report released in March, of the million deaths that occur annually – those related to aggravated asthma, bronchitis, emphysema, lung and heart diseases, as well as respiratory allergies, can be attributed to air pollution.

The new figures are more accurate than previous estimates, because technology allows for more efficient measurements of human exposure to air pollution. It combines satellite and pollution emissions data, ground-level monitoring and modeling of how pollution drifts into the air.

“Few risks have a greater impact on global health today than air pollution; the evidence signals the need for concerted action to clean up the air we all breathe.”

Kids, Women And Elderly Most Vulnerable

Air pollution happens when a chemical, physical or biological agent adversely affects the atmosphere. The worst offender? Unsustainable policies in the transport, energy and waste management sectors have led to “excessive air pollution” around the world, WHO pointed out. The countries with the most air pollution were the low- and middle-income countries in the southeast Asia and western Pacific regions.

RELATED READING: Cheap And Effective Ways To Improve Your Breathing

Meanwhile, air quality in the United States has sharply improved since the passage of the country’s Clean Air Act in 1970. For one thing, the National Oceanic and Atmospheric Administration, partnering with the Environmental Protection Agency (EPA), releases air quality forecasts daily as part of a national Air Quality Forecasting Capability. Control technologies and urban planning strategies have helped, too. Things like the use of bioethanol fuel, biodiesel, solar energy and hybrid vehicles. While these greener options may have high upfront costs, the long-term payback is significant.

Still, many parts of the U.S. are exposed to unhealthy levels of air pollution, which is responsible for an estimated 50,000 premature deaths every year, according to the EPA.

Hmmm. Might be time to do your part and consider driving a Prius.