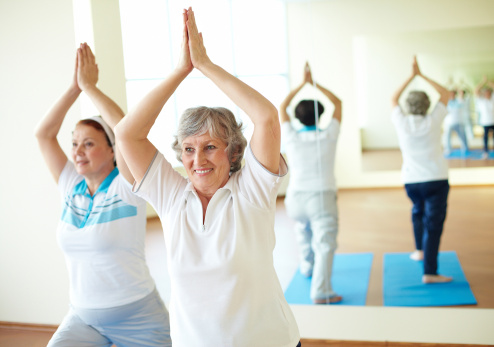 It is now generally accepted that regular exercise is essential for those who are seeking to maintain good health and lose weight. And now, it would seem that it may also be just what the doctor ordered for people suffering from medical breathing problems as well. Yoga, an ancient Eastern practice that how now exploded in popularity here in the West, has shown to be remarkably effective for people with a variety of breathing issues, particularly those with chronic obstructive pulmonary disease (COPD).

Chronic obstructive pulmonary disease is often caused by smoking. This disease essentially damages your airways to and from your lungs, making it incredibly painful and difficult to breathe. When an individual suffers from COPD, their airways become swollen and blocked by mucus, which causes them to experience discomfort and difficulty in breathing.

A study conducted by researchers at the All India Institute of Medical Sciences in the Department of Pulmonary Medicine and Sleep Disorders concluded that, with a specific regime of yoga exercises, patients with COPD experienced a drastic positive change in their breathing. The researchers found 29 patients in stable condition with COPD and provided them with a yoga exercise regime to assist them with their breathing patterns. The patients were evaluated on their lung function, quality of life, inflammation of airways and their general breathing, and then they were evaluated a second time at the conclusion of the study.

The researchers created a yoga exercise regime to assist the patients with their breathing. The yoga exercise program consisted of the following:

These yoga exercises were to be completed within 1 hour, twice a week, for 4 weeks.  After the four-week period, the patients were required to practice the yoga exercise program for 1 hour every 2 weeks, until a 12-week training session was completed.

At the conclusion of the 12-week period, each patient had shown signs of significant improvement in relation to their breathing and their general health. Inflammation of the airways had dropped and the rate of breathing had increased. Using yoga exercise as one method of treatment for COPD and other breathing problems had shown impressive success.

The Benefits of Yoga Exercise for Breathing

It is believed that the benefits the COPD patients experienced from yoga exercise could be extended to most people who suffer from breathing problems. Yoga exercise is also an extremely cost effective way to improve the quality of life for people. It also benefits the body, mind, and soul.

Aside from people with breathing issues, yoga exercise has proven to be beneficial for many individuals, including those with high stress, those with particular injuries or physical impairments, and for anyone looking to improve their over all health and well being.