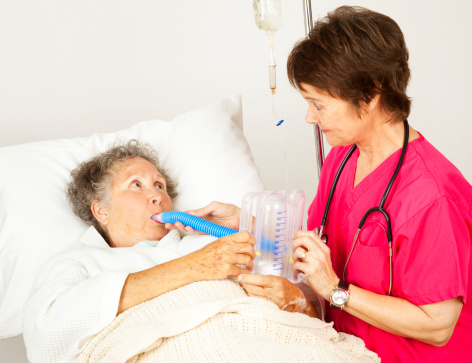 Breathalysers can do more than determine blood-alcohol levels in roadside police checks for people driving under the influence. A new non-invasive technology to test the breath for exhaled “biomarkers” of lung cancer is in development for early detection of lung cancer, the leading cause of cancer death in the United States.

One challenge with lung cancer is that it often spreads to advanced stages before being detected and diagnosed. Current tests for lung cancer can be costly and invasive; they include urine and blood tests, followed by CT scans and chest X-rays. This new method could see people at a high risk of lung cancer receiving an initial breath test to quickly assess their symptoms.

Researchers at the Respiratory Institute at Cleveland Clinic report that cancer cells release a unique chemical signature related to the tumor-growing process. The volatile organic compounds (VOCs), known as odorants, of this chemical signature are exhaled with breath, which can explain why animals are capable of detecting diseases based on breath tests. Scientists in Pennsylvania are currently training three breeds of dogs – Springer spaniel, Labrador retriever, and German shepherd – to sniff out ovarian cancer.

For the Cleveland Clinic study, subjects were recruited from clinics at the Cleveland Clinic and National Jewish Hospitals. The researchers examined 82 people with biopsy-confirmed lung cancer who had not yet received treatment against a control group of 155 people who either had benign lung nodules or who were at risk for lung cancer.

While breathing normally, the subjects’ breath was exposed to a high-dimensional chemical sensor called a colorimetric sensor array. The various chemicals detected by the sensor cause the colors to change. So, if the chemicals in the exhaled breath contain markers for lung cancer, the array would show that in a pattern of color changes. Not just for one pass, the sensor array continually monitored the chemicals exhaled from the breath of the subjects; the sensor changes accurately distinguished the breath of people with lung cancer from the control subjects.

The findings suggest an accurate exhaled breath biomarker of lung cancer could be developed into a clinically useful and effective early test for lung cancer.

RELATED READING: How To Calculate your Cancer Rate

Each time you take a breath, you use your lungs. Your lungs are located in your chest, one on the left and one on the right. The right lung has three lobes while the left lung has two lobes. The lungs are protected by the pleura which is a thin covering consisting of two layers of tissues. One layer of tissue covers the lungs and the other lines the inside wall of the chest.

In between the two layers, there is a small amount of plural fluid which allows the layers of tissue to slide over each other with each breath. When you take a breath in, the air flows down your trachea which is divided into the left and right bronchi. The bronchi are responsible for carrying air to your lungs.  The bronchi divide into bronchioles once inside the lungs and they end in a cluster of air sacs called alveoli. The alveoli take oxygen from the air you have breathed in into the blood. This oxygen is circulated to different parts of your body. The alveoli are also responsible for removing carbon dioxide from the blood and expelling it from your lungs when you exhale. Since your lungs are essential for breathing, lung cancer compromises their function and can be life-threatening.

What Is Lung Cancer?