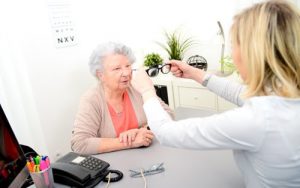 It has been documented that hearing loss is associated with a higher risk of cognitive impairment. New research suggests that vision loss may share the same link. The study looked at data collected from two large American studies and the researchers found that seniors who had difficulties seeing objects from a distance were two to three times more likely to develop cognitive impairment.

The researchers suggest that regular visits to eye specialists could help detect vision impairment early on so that treatment could be recommended, slowing the progression or onset of cognitive impairment.

Among Americans over the age of 40, vision problems affect one in every 28 persons. That number is expected to double by 2050.

“But (these neurosensory interactions) are increasingly relevant given a growing US population of older adults. We have greater numbers of individuals who are experiencing diseases and functional limitations of aging as they grow older,” Dr. Pershing continued.

Participants were asked about their vision, bothersome vision problems, and other health issues. Cognitive assessments were also conducted along with testing for dementia. Eyesight was tested as well.

Nearly one quarter of the participants had cognitive impairment of dementia.

Dr. Pershing added, “It makes intuitive sense that vision impairment might lead to social disengagement and speed up cognitive decline. Similarly, cognitive impairment when severe may result in functional visual impairment, even if the eyes are structurally healthy.”

The study is another reminder that seniors should be checking their vision regularly to avoid any long-term problems.

Related: Your risk of vision problems goes up because of this…