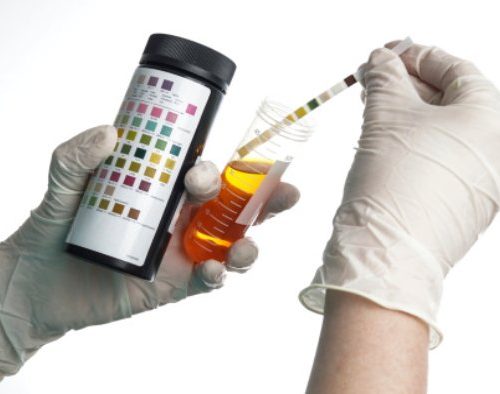 If you have urobilinogen in your urine, your doctor will likely inform you of it during a routine urinalysis. Urobilinogen is a by-product of bilirubin, which is a yellow compound processed by your liver that occurs in the normal catabolic pathways responsible for breaking down red blood cell products through hemolysis. Urobilinogen is formed in the intestines, and half of it is reabsorbed for normal circulation and excreted through your urine, while what remains is excreted in the stool.

When bilirubin is created, it produces urobilinogen, which can be used as a measure of your liver function.

The normal urobilinogen range is less than 17 umol/L (<1mg/dl). However, it’s still considered normal to have values in the range of 0 – 8 mg/dl. Having a urobilinogen level above or below this range is considered abnormal in a clinical setting.

Decreased urobilinogen levels may indicate a blockage in the bile duct system or bile production failure.

What causes urobilinogen in urine?

Caused by a number of different medical, bacterial, and parasite infections. Hemolysis is a process where RBCs are broken down too soon, requiring bone marrow to produce more red blood cells to compensate. When RBCs are broken down, they release their contents, which then get processed by the liver and form bilirubin and urobilinogen. RBCs typically live for about 120 days and then naturally break down to make way for newer RBCs. There is a delicate balance of breakdown and production that could be put in flux during cases of abnormal hemolysis.

The vitamins folic acid and B12 are necessary to produce RBCs. If the body is deficient in any of the two substances, it will cause pernicious anemia — a condition where the body does not have enough red blood cells. Insufficient amounts of B12 can cause the destruction of RBCs in the bone marrow, indirectly increasing bilirubin production.

The liver is the primary organ involved in a vast amount of metabolic processes, including the processing of bilirubin. When the liver is not performing adequately, a build-up of bilirubin can be appreciated and subsequently a build-up of urobilinogen. These are important clues your doctor will use to investigate further. Various diseases affecting the liver include hepatitis, cirrhosis, and liver cancer.

A rare hereditary genetic disorder that leads to an isolated increase in bilirubin. If you were to examine the livers of these individuals, they would appear black due to the deposition of a pigment similar to melanin.

A rare and relatively benign condition that is quite similar to Dubin-Johnson syndrome, as both cause an increase in conjugated bilirubin. Both genetic conditions are similar in presentation, with the exception that Rotor’s syndrome not presenting with a darkly pigmented liver.

A condition that is characterized by the heart not being able to pump as much blood as it needs to ensure adequate perfusion. This means that oxygen and nutrients are not provided to the organs and tissues in a sufficient manner to satisfy the body’s needs. In response to the hearts decreased ability to pump blood, your kidneys will attempt to compensate by causing the body to retain fluid. Unfortunately, this will cause the arms, legs, ankles, and other organs to swell up and appear congested.

A common occurrence when ingesting lead-based paint or lead-contaminated dust in older buildings. Other sources of lead poisoning include contaminated air, water, and soil. Lead is a poison that can build up in the body over time, leading to health problems and severe liver damage.

The blockage of the ducts that transport bile, interrupting proper flow. This can be caused by gallstones blocking the passageway, making them narrow as a result of scar tissue formation.

A rare inherited disorder affecting the metabolism of bilirubin, resulting in high levels of unconjugated bilirubin found in the blood stream. If left untreated in newborns, this condition can lead to irreversible brain damage.

Taking antibiotics can wipe out beneficial bacteria in the gut that help transform bilirubin into urobilinogen. Vitamin C and ammonium chloride can also increase the acidity of the urine when taken in high amounts. Acidic urine will lower the concentration of urobilinogen.


Tests and treatment for urobilinogen in urine

Urobilinogen levels can be tested with the use of urobilinogen test dip-sticks. These dip-sticks make use of P-dimethylamino-benzaldehyde, which is known to react strongly to acidic conditions, with urobilinogen producing a pink color upon contact. When the color pink is produced, it means urobilinogen levels are normal or less than 1mg/dl. However, the test strip may appear obscured in color owing to the presence of p-aminosalicylic acid and sulphonamides in high concentrations.

The urobilinogen strip test should be considered a diagnostic tool. It is up to a trained professional to gather all the clues and to perform any additional testing to make an informed and accurate diagnosis about a patient’s particular circumstance.

Your doctor will outline the best treatment options available depending on the cause of your abnormal levels of urobilinogen, with the goal to eliminate the problem as soon as possible.

If your case of urobilinogen is due to hemolysis, iron supplementation will be utilized to help replace lost red blood cells. If abnormal urobilinogen is due to medication, you will either be switched to an alternative or be told to stop the medication outright. Cases of liver disease will require more extensive treatment and you will be monitored closely. Depending on the extent of liver damage, a person may be confined to the hospital for better monitoring of the liver’s condition. In the most severe of cases, a liver transplant may be required.

Abnormal urobilinogen levels are not something that most people stress about, as they may not know exactly what its implications are. But the bottom line is that abnormal levels indicate that something going on in your body is not normal. Knowing that your liver and other bodily processes contribute to this value, engaging in regular exercise and eating a healthy diet while avoiding liver damaging substances will help.