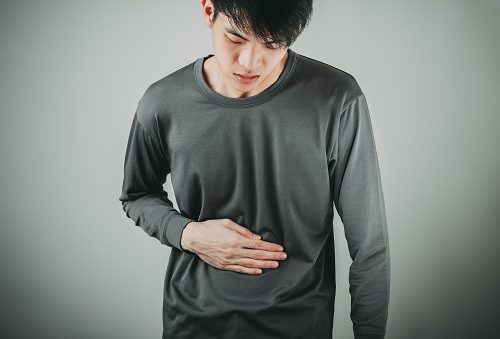 Determining what causes liver pain can be difficult, considering that the brain perceives abdominal pain from many organs in what experts call an “ill-defined” way. Still, advances in medicine have helped the medical community come to a better understanding of what causes pain in the liver area.

Research tells us that the liver’s pain receptors are located on the organ’s surface, and the pressure a person feels when they experience liver pain is likely from a capsule that covers the organ. The pain is usually felt in the upper right part of the abdomen. Often, people who experience discomfort complain about pain right under their rib cage. No matter what the causes of pain in the liver might be, the condition typically involves swelling, inflammation, or enlargement of the liver. Injury can lead to liver pain, but some causes of liver pain can be linked to various disorders.

People often confuse liver pain with other abdominal pain, but again, actual liver pain is signified by discomfort in the upper right abdomen. There are still some situations where right upper quadrant pain is caused by gallstones or pancreatitis. It is important to see a doctor to get a proper assessment.

What causes pain in liver area?

The causes of liver pain continue to be studied and, sadly, statistics show that liver disease is a common problem. The American Liver Foundation estimates that one in 10 people are impacted by liver disease.

The liver is one of the largest organs in the body and it performs an important function. It converts nutrients from our diet into substances that the body can use or store. The liver also gathers toxic substances and aids in releasing those substances from the body. When the liver is under stress for any reason, it can be very uncomfortable and dangerous.

Here’s a close look at the different potential causes of liver pain:

This is a condition that occurs when the liver cells and tissues deteriorate, impacting the function of the organ. A viral infection or excessive consumption of alcohol can lead to cirrhosis. Hepatitis B, C, and D have also been associated with liver cirrhosis.

A liver tumor can cause pain in the abdominal area. Medical screening usually detects it. The pain is often constant and dull, but sometimes it can be sharp pain. Rates of liver cancer are increasing in the U.S due to the rise in the cases of cirrhosis caused by hepatitis C and non-alcoholic fatty liver disease. There is a cancer that can develop in the ducts of the liver called cholangiocarcinoma.

This is caused by an accumulation of too much fat in the liver cells and it is usually a result of poor diet. Does fatty liver disease cause pain? The answer is yes, but in many cases, the pain is mild. The condition does include a lot of other unpleasant symptoms, including fatigue, loss of appetite, and even confusion. Alcohol abuse can lead to fatty liver disease but so can infections, toxins, and obesity.

When fluid builds up in the liver, a cyst can form. Pain is only experienced when the cyst is chronic. The discomfort is usually felt at the top of the abdomen and tip of the right shoulder. The exact cause is unknown.

This happens when excessive iron deposits damage the liver along with other organs. Hemochromatosis can lead to fatal hepatitis and cirrhosis.

Excessive copper building up within the liver causes Wilson’s disease. It is a disease that is incurable and can cause a lot of health complications.

When the liver experiences infections, the spleen can become enlarged. This puts pressure on the liver.

This is a rare and serious condition that leads to swelling in the liver and brain. It most often impacts children and teenagers who have had a viral infection such as the flu or chickenpox. Confusion, seizures, and loss of consciousness have been experienced with Reye syndrome. According to the Mayo Clinic, aspirin has been linked to this syndrome. Children recovering from flu-like symptoms or the chickenpox should not take aspirin.

There are different types of hepatitis, but it generally refers to inflammation of the liver. It is often caused by a viral infection, but it can also be the result of ingesting toxins, from drinking too much alcohol, or the result of taking certain drugs. The Centers for Disease Control and Prevention (CDC) reports that about 4.4 million Americans have chronic hepatitis and many more people don’t even realize they have the condition.

Excessive drinking has long been linked to liver problems. Over time, heavy drinkers can experience scarring and cirrhosis along with many visible symptoms including fatigue, poor appetite, fluid build-up in the abdomen and the legs, yellow colored skin (jaundice), red spider-like blood vessels on the skin, impotence, and confusion. When cirrhosis progresses to end-stage liver disease, a liver transplant may be required.

A block in the flow of blood through the liver organ. It can be caused by thrombosis, a blood clot due to hypercoagulability disorder, severe atherosclerosis, or vasculitis. It can also be the result of an embolus, which is a free floating blood clot that travels from another part of the body and becomes lodged in the hepatic vasculature. Symptoms usually present when cell damage due to restricted blood supply occurs. Symptoms may include right upper quadrant, fever, nausea, vomiting, and jaundice.

A pocket of pus that forms in the liver due to bacterial infection. Pus is composed of white blood cells and dead cells that typically form when your body fights an infection. Normally, the body drains the infection, but in the case of an abscess, the pus collects in a pocket inside the liver. Abscesses are usually accompanied by swelling and inflammation and can cause pain and swelling in the abdomen. Pyogenic liver abscesses can be fatal and should be treated right away.

A condition where the flow of bile (digestive fluid produced by the liver) is impaired at some point between the liver cells and a segment of the intestine. Bile is subsequently absorbed by the body instead of being excreted into the digestive system, leading to an increase of the substance bilirubin in the blood stream. Symptoms of cholestasis include jaundice, dark urine, light-colored stool, and generalized itchiness.

A relatively common occurrence in the liver but can be a sign of a more serious health issue. Cysts are thin-walled sacs filled with air, fluid, or semi-solid material. Symptoms generally depend on the cause and may include bloating, pain in the upper right abdomen, nausea, vomiting, jaundice, and poor appetite.

Liver condition pain can be treated depending on the cause. In many cases, a patient’s diet will be examined. The liver does have some ability to repair itself if we are kind to it. Research on the livers of mice has shown that inadequate protein can lead to a decrease in liver volume and that adequate protein added back into the diet can reverse some damage.

Lifestyle changes, such as losing weight and lowering cholesterol, are good ways to protect your liver. While some people may be advised to take medication to treat liver pain, it is advisable not to self-medicate. For instance, over-the-counter painkillers such as acetaminophen can react negatively in people with liver problems.

What are the early signs of liver damage?