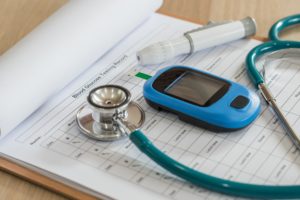 According to a new study published in the journal Diabetes Care, people with undetected diabetes could run a higher risk of heart attack and periodontitis. The results of the study bring awareness of the need for greater collaboration between dental care and healthcare. This could possibly include such services as screening for diabetes at dental clinics.

The study, a collaboration between cardiologists and dentists at Karolinska Institutet in Sweden, was based on data from previous research called PAROKRANK. The previous research had shown that severe periodontitis is associated with a higher risk of lowered glucose tolerance and myocardial infarction. It was also shown that diabetes is more common in people who have suffered a heart attack.

This new study was set in place to find whether undetected glucose disorder (dysglycemia), the reduced ability to metabolize sugar, is linked to the two conditions, periodontitis and myocardial infarction. It included 805 heart attack patients from Swedish cardiology clinics. Their gum disease status was recorded with x-rays and their dysglycemic status was assessed with glucose load tests.

Those with a diabetes diagnosis were excluded from the study and the remaining patients were divided into three categories for glucose status, normal, reduced glucose intolerance, and newly detected diabetes. Adjustments were also made for age, sex, education, smoking habits, and civil status.

At the conclusion of the study, it was found that previously undetected glucose disorders, including impaired glucose tolerance and diabetes, were linked to myocardial infarction. It was approximately two times more likely for heart attack patients to have undetected dysglycemia. This outcome confirmed the research group’s earlier findings. The study also found that undetected diabetes was also linked to severe periodontitis.

The study’s lead author Anna Norhammar, a cardiologist and associate professor at Karolinska Institutet’s Department of Medicine in Solna, spoke about the findings. “Our findings indicate that dysglycemia is a key risk factor in both severe periodontitis and myocardial infarction and that the combination of severe periodontitis and undetected diabetes further increases the risk of myocardial infarction.”

This study has successfully reinforced the previous links between periodontitis and diabetes and goes to show that such an association also exists in previously unknown diabetes. Researchers are hoping that this study will start to pave the way for diabetes specialists to consider their patient’s dental health. They are also hoping for closer collaboration between physicians and dentists.

The present study’s senior author Lars Rydén said, “The PAROKRANK study is a good example of such collaboration.”

The idea of looking at total health and body to treat disease is nothing new, but for centuries, we seem to have stepped away from the notion that everything in the body is linked. This is a large step towards connecting all parts of healthcare and researchers hope that one day soon, dentists and doctors will work together to help decrease disease risk.