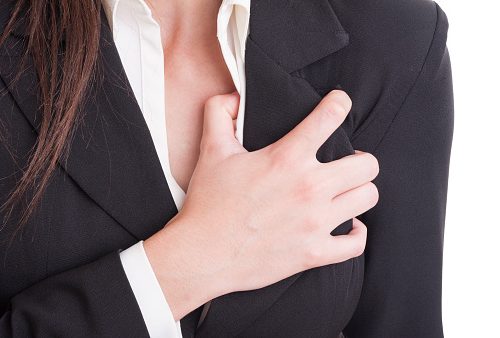 February 3, 2017 was National Wear Red Day, an event held by the American Heart Association that raises awareness about the high risk of heart disease among women. Women have nearly double the risk of dying due to a heart attack as men do, and education about the signs and symptoms is necessary in order to help reduce and prevent these potentially fatal events from occurring.

Continue reading to learn about the prevalence of heart disease in women, as well as how to identify common heart attack symptoms and what effect aging has on a women’s heart as she ages.

Facts on women and heart disease

Cardiovascular disease and strokes are responsible for approximately one in every three American women’s deaths each year, meaning these issues kill one woman every 80 seconds. Approximately 44 million women in the U.S. alone are affected by cardiovascular disease, with 90% of them having at least one risk factor for developing heart disease or suffering a stroke. A significant 80% of cardiac and stroke events in women could be prevented through better education and lifestyle changes, which makes acknowledging these risk factors and treating them extremely important.

Forty percent of women with heart problems will experience shortness of breath up to six months prior to a cardiac event because of lack of oxygen caused by a weak heart. Unlike men, women are more prone to experiencing severe fatigue because of a heart attack. Over 70 percent of women experience extreme fatigue months prior to a heart attack and this fatigue can worsen causing legs to feel heavier. If you fatigue is sudden without overexertion, then go see your doctor.

Worldwide, 8.6 million women die from heart disease annually. Nearly eight million American women currently live with heart disease in the U.S. Women under the age of 50 who experience a heart attack are twice as likely to die compared to men.

Women and men may experience different heart attack symptoms. For women, these symptoms can be classified as typical or atypical. Typical symptoms include chest pain that feels like pressure, squeezing, or stabbing pains in the center or left side of the chest. Discomfort and pain in the arms is also considered a typical symptom, most notably in the left arm. This pain can also spread to the neck and jaw. Typical symptoms also include nausea and vomiting, as well as shortness of breath and fatigue.

Atypical symptoms experienced by women over 50 who are suffering a heart attack include abdominal pain or discomfort, excessive sweating, lightheadedness and dizziness, toothache, weak or irregular pulse, and unusual levels of anxiety and stress.

Women may also experience indigestion, nausea, and stomach pain. This can be a result of fatty deposits blocking arteries, which limits blood flow resulting in angina. For some, angina presents itself as pain. In others, the signal can be sent to your stomach causing digestive distress. Women over the age of 60 are more likely to experience indigestion because of an impending cardiac event. Stomach pains may also worsen with physical activity and improve at rest. If this occurs, see your doctor.

Factors that Increase Heart Attack Risk at 40 and 50

There are many factors that increase the risk of a heart attack in women aged 40 to 50. One factor is known as SCAD (spontaneous coronary artery dissection). This occurs when the innermost three layers of the arteries tear spontaneously, which causes a clot or flap that narrows blood flow or blocks it completely. Factors that increase a woman’s risk of SCAD include hormonal changes, such as those found in pregnancy or menopause, and women with connective tissue disorders like noncoronary fibromuscular dysplasia.

Symptoms of SCAD are very similar to those of a heart attack and it’s best you seek out immediate medical attention when you experience these symptoms to rule out SCAD or a heart attack. Both are very dangerous and the sooner they are caught, the better the outcome can be.

Women who smoke are more likely to experience menopause earlier compared to non-smokers. This leads to another reason as to why one should not smoke. Not only is it bad for your health, but it can speed up menopause, which increases the risk of a heart attack.

An alternative study not only confirmed the findings that early menopause hurts a woman’s heart but that it increases a woman’s risk of coronary heart disease. On the other hand, no association was found between early menopause and stroke.

Lastly, hot flashes, a common symptom of menopause, has been shown to be an indicator of an early vascular dysfunction that could ultimately lead to heart disease. Dr. JoAnn Pinkerton, executive director of NAMS, explained, “In this study, physiologically measured hot flashes appear linked to cardiovascular changes occurring early during the menopause transition.”

Impact of aging on a woman’s heart

As women age, their risk of dying from heart disease increases. A woman’s chance of suffering a heart attack doubles between the ages of 60 and 79, and doubles again once they hit 80. The risk of a heart attack being fatal increases significantly every ten years for women, and the higher risk almost always begins after menopause.


Key differences between heart attacks in men and women

Some of the major differences between heart attacks in men and women are:

Tips for women to achieve a stronger heart

Six key tips for women to achieve a healthier and stronger heart are:

Control your risk factors: Diabetes, high blood pressure, and high cholesterol increase the risk of heart disease, so it’s important to manage these conditions. Talk to your healthcare provider about an effective treatment plan.

Don’t smoke: If you smoke, try to quit.

Eat a heart-healthy diet: A diet that’s full of vegetables, fruits, and whole grains is good for your heart. Limit the amount of saturated fat and sugary beverages in your diet.

Talk with your doctor about aspirin: Daily use of low-dose aspirin is not right for everyone. Aspirin can have side effects, so talk with your healthcare provider first.

Know the symptoms of a heart attack: Symptoms of heart attacks in women can be different from those in men. For women, they may include shortness of breath, nausea, and an ache or feeling of tightness in the chest, arm, neck, jaw, or abdomen.

Heart disease is one of the leading causes of death for American women, and the risk of suffering a fatal heart attack only increases with age. It is vital that women and those around them educate themselves on the risk factors and symptoms associated with cardiovascular disease, as well as heart attacks and strokes, so they may work actively towards preventing these issues.

Why Is Your Heart Attack Risk Higher in the Morning?