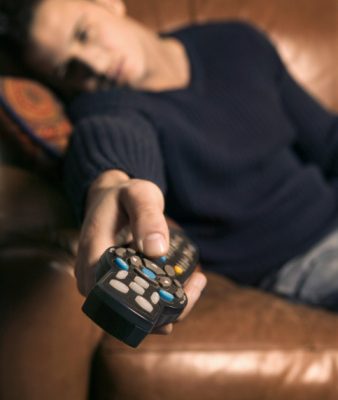 It could be one of the most simple studies aimed at getting people off the couch to date. A new Northwestern Medicine study outlines the idea of the “domino effect” and what it means for obesity and weight gain.

The reports say that the theory is easy. If you simply change one bad habit, it has a domino effect on others. If you get off the couch, you could find it a lot easier to reduce the amount of time spent snacking while on the couch. Because the behaviors are linked to one another, getting rid of one of the behaviors (which would ultimately prevent weight gain) means the other one will disappear, too.

What This Means for Obesity and Weight Gain

The study found that two specific lifestyle habits really seem to be tied to one another. Cutting down on time spent in front of a TV and eating more fruits and vegetables are the two changes that came up often in the study. Bonnie Spring from Northwestern University (who conducted the research) says, “Just making two lifestyle changes has a big overall effect and people don’t get overwhelmed.”

With such simple advice, people can achieve goals, and also maintenance, which is very important. With this simplified strategy, people are capable of making big lifestyle changes in a short period of time and maintaining them.

The following bad habits considered to be the biggest offenders were as follows:

Within the confines of the study researchers assigned 204 adult patients (with an age range of 21 to 60 years old) who had all of the bad habits listed above into one of four treatment groups, as follows:

During the three weeks of treatment, patients entered their daily data into a personal digital assistant and uploaded it to a coach who communicated as needed by telephone or email.

As Easy as Eating More Fruits and Vegetables?

Part of the study involved a cash payment to participants that was removed after a set period of time. Researchers wanted to see if participants continued with the healthy habits, after they stopped receiving the payments.

A six month follow up of the participants, it was shown that the average servings of fruit/vegetables changed from 1.2 to 5.5 to 2.9 – average minutes of sedentary activities went from from 219.2 to 89.3 to 125.7, and daily calories from saturated fat from 12 percent to 9.4 percent to 9.9 percent.

Researchers say this helps restore a little faith in the conscientiousness of people and their ability to exhibit lifestyle changes. About 86% of participants said once they made the change, they tried to maintain them.