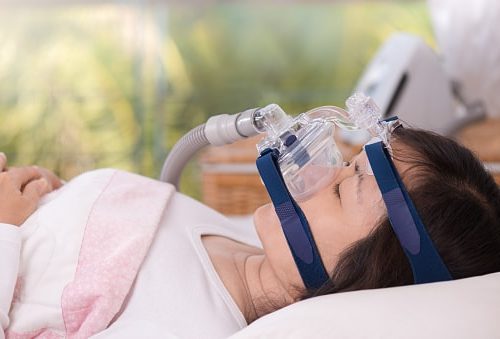 Sleep apnea is a sleep disorder categorized by snoring and poor breathing quality throughout the night. Sleep apnea, if left untreated, can contribute to obesity, high blood pressure, headaches, and other health problems.

The most common treatment for sleep apnea is the use of a continuous positive airway pressure (CPAP) device. This device is a mask worn throughout the night which sends continuous air through the mouth or nose to prevent the cessation of breathing and ease symptoms.

A new study suggests that sleep apnea patients who use a CPAP device may experience improvements in their sex lives, especially women.

The researchers explored the use of CPAP devices and sexual quality of life among 182 men and women diagnosed with sleep apnea. The researchers compared perceived changes in sex quality among 72 regular users of the CPAP device and 110 occasional users over the course of a year.

They found that continued use of a CPAP machine for at least four hours a night improved perceived sex quality.

Sleep apnea affects roughly 25 percent of men and nine percent of women with postmenopausal women being at a higher risk. When the researchers divided the findings by gender, they found greater improvements in perceived sexual quality among women – nearly nine times greater than men.

What is unclear is the mechanism that causes the increase of sexual quality. Further research is required to determine what comes into play. Some theories are that using a CPAP device reduces fatigue, which is a big factor in libido and sexual quality.