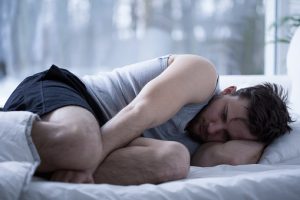 Catatonic depression is a subset of depression that is characterized by additional symptoms of extended periods without speaking and remaining motionless for a long time. The term catatonic is not a separate illness, but rather considered an additional part of an already present diagnosis. Other illnesses such as post-traumatic stress disorder, bipolar disorder, and schizophrenia could also have catatonia has a distinction.

Those affected may not be able to perform simple tasks such as sitting up in bed or changing their clothes. They may also sit quietly for hours on end not moving a muscle.

It is thought that catatonic depression is caused by dysregulation of the GABA, Gglutamate, and dopamine; neurotransmitters of the brain. Catatonic depression features the symptoms of depression while including neuro genetic motor inability. When presented with a case such as this, medical professionals need to identify the root cause of the depression to solve the problem.

It is estimated that less than 10 percent of psychiatric patients develop a mental disorder with catatonic features making its appearance quite rare.

Major depressive disorder has a wide subset of symptoms which must be met to be labeled as having catatonic depression. These preliminary symptoms may include:

Additional symptoms of catatonic depression may include:

The precise cause for catatonic depression is not known, but it is believed to be the result of an imbalance of chemicals in the brain called neurotransmitters. When working normally, these endogenous chemicals transmit signals across a chemical synapse, such as the neuromuscular junction, from one nerve cell to another or between muscle cells. Neurotransmitters play an important role in regulating everyday functions.

If treatment is not received, patients with catatonic depression may experience the following complications: blood clots, shortening of muscles or tendons, decubitus ulcers, dehydrations, malnutrition, and pneumonia.

How Is Catatonic Depression Diagnosed?

Diagnosing catatonic depression may be difficult because often, a patient cannot answer the questions asked by a doctor. For this reason, a doctor may turn to patients loved ones for answers and insight into symptoms.

Imaging tests on the brain may also be useful to rule out tumors or other conditions as well.

Lastly, a doctor will pay close attention to the patient’s posture and movements which can provide insight into catatonic depression.

How to Treat Catatonic Depression?

Due to the acute and often clinically severe nature of having catatonic depression, no large-scale, controlled studies, or meta-analyses have been carried out to identify effective intervention for the condition. However, several appropriate therapies as part of psychiatric treatment have been found to be effective. The following are some of the treatments used for catatonic depression.

Considered the first line treatment for catatonia, as they help to increase levels of the GABA neurotransmitter in the brain. It is a class of psychoactive drugs commonly used in the treatment of anxiety, muscle spasms, and insomnia. It is estimated that about 50 to 70 percent of catatonic patient will respond to benzodiazepines, with about 79 percent having complete remission. However, this drug is considered highly addictive and should only be used on a short-term basis.

This form of treatment has the unique position of not only treating catatonia but potentially the underlying condition as well. Early utilization has been associated with more optimal outcomes. ECT is done by attaching electrodes to the head and sending electrical impulses to the brain, essentially causing a mild seizure. Despite how it sounds, ECT has been proven to be safe and effective.

To improve prognosis of catatonic depression, treatment must be administered early on. Treatment is often long-term but can improve outcomes for patients. It’s also important that any other corresponding conditions, including other mental health issues, be treated as well to further improve prognosis.

Patients should be monitored for additional health risks, as catatonic depression patients are often at a higher risk of death from thromboembolic diseases.

Recognizing the symptoms of depressive catatonia can be obvious. If you have a loved one you see on a regular basis, observing their behavior for depressive tendencies and catatonic behavior is easy. Catatonic depression is fully curable in most cases with early intervention and proper treatment. It is advised to seek urgent medical care for anyone you suspect has the condition.