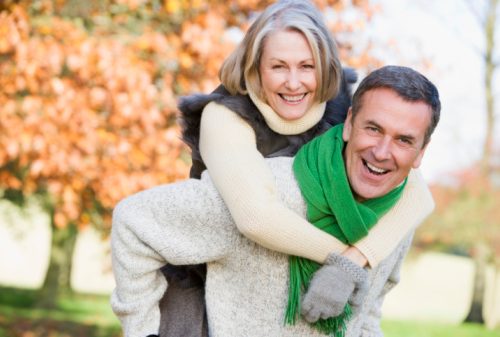 Sexual satisfaction is an important aspect of any healthy relationship, helping to keep the bond between a couple strong. Unfortunately, as we age, many of us forget to make our sexual health a priority, or, for health reasons, find it difficult to. Recent studies have found that, no matter what stage of life a couple is in, allowing sexual satisfaction to fall by the wayside not only compromises marital relationships but also reduces our overall happiness levels. Luckily, restoring sexual health and happiness in midlife and beyond is as simple as dispelling a few sexual myths and making a few simple lifestyle changes.

According to the Harvard Medical School’s Special Health Report, “Sexuality in Midlife and Beyond,” there are four leading sexual myths that act as major deterrents to sexual satisfaction as we age, and dispelling them can do wonders for our love lives. The first myth, which is constantly propagated by the media, is that sex is for the young. Instead of buying into this myth, the Harvard Report recommends thinking about what made you attractive in your younger years. Whether it was a magnetic laugh, gorgeous blue eyes, or sweet looking dimples, chances are you still have those attributes, and they are as appealing as ever to the opposite sex. Don’t believe me? A survey conducted by the AARP found that the percentage of adults over 45 who consider their partners physically attractive actually increases with age.  So stop the negative self-talk, practice self-love and concentrate on thinking that your partner likely finds you more attractive than ever.

The second myth that needs to be dispelled is that sex in later life is ‘undignified.’ The Harvard Health Report points out that people are remaining healthier and living longer than ever before. Many seniors are every bit as vigorous and vital (if not more so) than they were in their thirties. Clearly, it is time to throw away the outdated stereotypes that desexualize older adults. It’s normal and healthy to have sexual urges, no matter how old you may be, and fulfilling your sexual appetite is also normal and healthy. Doing so can even increase your overall lifespan.

The next myth is that you lose your ability to perform sexually after a certain age. Just because some vaginal dryness or erectile difficulties may develop, there is no reason to throw in the towel. Simple solutions such as vaginal lubricants for women or male performance enhancers can help to circumvent physical hindrances and restore your sexual health. In addition, you should consume a healthy diet that is low in saturated fats, high in antioxidants, and based on whole foods. Regular exercise also aides with sexual performance. These simple changes can help to balance hormones, and may even reduce vaginal dryness and erectile difficulties naturally. If these changes aren’t enough, reform your style of lovemaking – instead of concentrating on penetration and orgasms, focus on demonstrating affection and extending foreplay.

The final myth that may be hindering your sexual satisfaction level is the idea that sex is “boring” when you’re old. Many people falsely believe that the predictability of having the same partner for decades, in combination with a lower libido and slower rates of arousal, means that one’s sex life is doomed to be lackluster. In reality, says the Harvard Report, “sex is as good as you make it.” Instead of concentrating on changes that you perceive to be negative, focus on the positive side of those changes. For instance, less penile sensitivity means that the erections can be maintained longer. Also, with age comes experience and enhanced technique. In addition, sex between younger couples is often overly focused on the male orgasm, but as men age, they often learn patience and become better able please their partner. This, in combination with the increased sexual confidence that women acquire as they age, can mean more mutually satisfying sexual encounters.

Dispelling these four myths will no doubt help you achieve and maintain sexual satisfaction as you age. In addition, you should open up the lines of communication with your partner, and talk about sex with him or her in an honest, yet playful manner. Make an effort to avoid sexual ruts by changing things up and trying new things. Finally, set the stage for sexual health by engaging in romantic encounters together outside of the bedroom – these special moments will refuel your bond and increase your desire for one another.