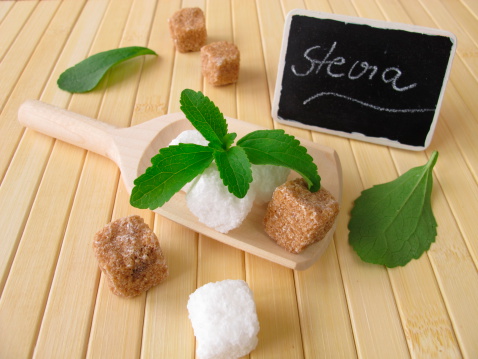 We all strive to lose weight by making healthier food choices, as obesity is known as one of the main contributors to heart disease and diabetes. This may lead you to reduce the amount of sugar in your diet, making you reach for a low-calorie sweetener as opposed to traditional table sugar. While a bevy of artificial sweeteners are currently on the market, there is one that is not artificial at all, but instead, it is a plant-based sweetener called stevia. According to a new study, it may lead to the activation of a protein that plays a role in the release of insulin.

Stevia is a plant-derived sugar alternative that comes from the stevia rebaudinana (Bertoni) bush plant, which is related to the common daisy or ragweed plant family. The stevia plant is native to South America and its leaves have been used for hundreds of years as a mild sweetener for foods, and it also served as a treatment for burns, stomach problems, and even as a contraceptive. Stevia is around 200 to 400 times sweeter than table sugar and it is often used as a sugar substitute in diet soda, candies, and desserts today.

Researchers at the United Kingdom and Belgium have found that stevia activates a protein called TRPM5, which is associated with taste perception, but what’s even more interesting is that it causes insulin to be released after eating. This has sparked interest in the product to treat type 2 diabetes, according to study co-author Koenraad Philippaert of the Department of Cellular and Molecular Medicine at KU Leuven in Belgium.

Stevia has indicated that it may even help control blood sugar levels. Admittedly, the mechanisms are not fully understood, but Pilippaert and his team wanted to shed light on the issue.

In the experiments involving cell cultures, it was found that stevia stimulated the pancreas to release insulin after food intake. This, in effect, helps regulate blood sugar levels, preventing the development of type 2 diabetes—a condition whereby the pancreas is unable to produce enough insulin or the body is unable to effectively use it.
To confirm these results, studies on mice were carried out to confirm the role of TRPM5 stimulation. They achieved this by inducing type 2 diabetes in the mice by feeding them a high-fat diet over a long period of time. The researchers found that when the high-fat diet was substituted with stevioside—an active component of stevia, the mice did not develop type 2 diabetes. This was not the case for mice that lacked the TRPM5 protein.

“This indicates that the protection against abnormally high blood sugar levels and diabetes is due to the stimulation of TRPM5 with stevia components,” says study co-author Prof. Rudi Vennekens.

The researcher believes that this fundamental research still has a long way to go and that human trials will give more definitive results.

Related: Aspartame vs. Sugar – Is One Any Better?

Type 2 diabetes may be reversible: Study