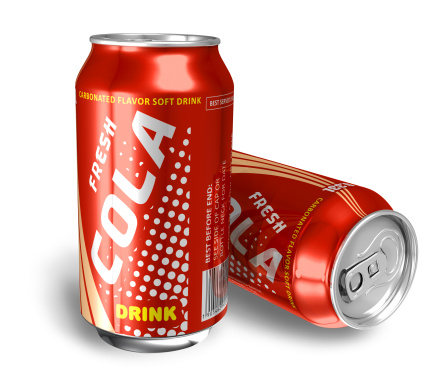 Drinking soda to quench our thirst or as a beverage with our daily meals has become commonplace. We know just how much sugar content soda contains, so we opt for diet, but even diet soda has negative consequences. According to a new study, drinking sugary soda—or even sugar-free variants—might damage the brain, accelerating brain age and causing poor memory, a smaller overall brain volume, and a significantly smaller hippocampus—an area of the brain important for learning and memory.

Americans love their sugar, and as a matter of fact, we consumed nearly 11 million metric tons of the stuff in 2016, according to the U.S. Department of Agriculture—much of this sugar consumption was in the form of drinks, like soda and sports drinks. New research into this topic has led researchers using data from the Framingham Heart Study (FHS) to come to the conclusion that fructose—the type of sugar commonly found in soda and other sugary drinks—can damage the brain, and a follow-up study into diet soda found that people who drank the stuff daily were almost three times as likely to develop stroke and dementia when compared to those who did not.

While researchers recommend against consuming excessive amounts of sugary drinks or diet soda, they admit that more research is needed. They point out that these findings do not necessarily demonstrate a cause-and-effect correlation, as it is not clear if other factors are at play. The researchers would like to know how or if these types of drinks actually damage the brain and how much damage may be caused by underlying vascular disease or diabetes.

“These studies are not the be-all and end-all, but it’s strong data and a very strong suggestion,” says Sudha Seshadri, a professor of neurology at Boston University School of Medicine (MED) and a faculty member at BU’s Alzheimer’s Disease Center who is senior author on both papers. “It looks like there is not very much of an upside to having sugary drinks, and substituting the sugar with artificial sweeteners doesn’t seem to help. Maybe good old-fashioned water is something we need to get used to.”

The first study on fructose consumption, researchers examined data, including magnetic resonance imaging (MRI) scans and cognitive testing results from about 4,000 participants. They looked at people who consumed more than two sugary drinks a day of any type, such as fruit juice, soda, and other soft drinks, or more than three per week of soda alone. The high intake group was seen to have signs of accelerated aging brain aging, smaller overall brain volume, poorer episodic memory, and a shrunken hippocampus—all risk factors for early stage Alzheimer’s disease. The researchers additionally found that the consumption of at least one diet soda per day was associated with smaller brain volumes.
The second study looked specifically at whether participants had suffered a stroke or were diagnosed with dementia due to Alzheimer’s disease, and looked at their beverage intake over 7 and 10 years. They found no correlation between sugary beverage intake and stroke or dementia. But they did find that people who drank at least one diet soda per day were almost three times as likely to develop stroke and dementia.

The researchers were quite surprised at this result for diet soda and think that artificial sweeteners may cause harm by transforming gut bacteria to alter the brain’s perception of the sweet taste. They admit, however, that more work is needed to figure out the underlying mechanisms.