Home » Brain Function » Sleep » Sleeping in the side position may help reduce the chances of developing Alzheimer’s, Parkinson’s disease 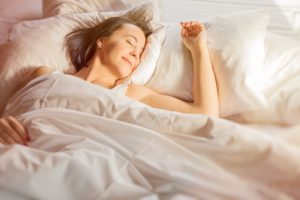 Getting a good night’s sleep is important if we want to be productive and happy. Our bodies have been telling us this for years and so have countless sleep studies. Now we’re learning that it’s not just the quality of sleep we get that is vital to our well-being, it’s also the sleep positions we choose.

According to the latest research, sleeping on our side – as opposed to our back or stomach – could be a healthier position for our brain. Sleeping on the side allows our brain to clear out waste while we are resting.

Researchers from Stony Brook University used an MRI to monitor what is called the brain’s glymphathic pathway. This is the system that takes waste out of our brains. The researchers discovered this system works best when people sleep on their sides. Neurologists say brain waste can include proteins that make up the plaque linked to Alzheimer’s disease. This means that sleeping style could be a factor in developing such neurological diseases.

The brain’s cleansing process clears out waste when cerebrospinal fluid (CSF) filters through the brain and exchanges with interstitial fluid (ISF). This process is similar to the way the body’s lymphatic system cleans waste from our organs, and it is most efficient while we are sleeping.

The good news is, the majority of human beings do sleep on their side. It has been suggested that we naturally adapted to the side-sleeping position to clear out brain waste products that build up while we are awake. The researchers believe the study adds more support to the idea that sleep serves as a biological function to “clean up the mess” that develops while we are awake.

A lot has been written about the link between sleep difficulties and memory loss in diseases like dementia, Alzheimer’s, and Parkinson’s. Alzheimer’s disease is an irreversible, progressive brain disorder that slowly destroys memory skills. Parkinson’s disease is a brain disorder that leads to stiffness, shaking, and difficulties with walking and balance.

The neurological study carried out by the team at Stony Brook University was in fact an animal study, so the next step is to conduct a human study.

How sleep positions can affect your health

Sleeping position: On your back

Sleeping on your back is the best position to get proper rest. The back-sleeper maintains the back, neck, and spine in a neutral position, making it better for your body’s alignment, especially if you’re prone to back pain, stiffness, or other back problems. The back position is also good for circulation to the brain and preventing acid reflux. When the head is elevated (a single, puffy pillow is recommended), your stomach sits below your esophagus, so acid or food can’t come back up. While it’s best to avoid foods that irritate or cause acid reflux, this is a reassuring technique.

You’ve heard of the term “beauty sleep?” The back-sleeper has the advantage when it comes to wrinkle prevention, simply because nothing is pushing against your face during the night, creating those dents and creases. Breasts, too, can benefit from back-sleeping, keeping them perky by the full support throughout the night.

Sleeping position: On your side

Side sleepers, good for you! Next to the back, sleeping in this position is good for your overall health and lets you spoon with your partner as you drift off to la-la land. Even better, sleep on your left side, which helps ease heartburn and acid reflux. Side-sleeping reduces snoring. Also, sleeping on your left side is the best position during pregnancy. It boosts circulation to the heart, so it’s also a boost for the baby. Pregnant women should not sleep on their back because of the extra pressure and weight this puts on the spine.

Retreating into the fetal position, with your knees pulled up high and your chin tucked into your chest may seem like the ultimate security blanket, but it’s not so good for your health. It restricts your deep diaphragmatic breathing and puts pressure on your organs, not to mention your spine. People with an arthritic back or joints will only feel more irritation. Straightening out a little can help make this position work better for you. In the fetal position, face wrinkles will be aggravated, although snoring could improve.

Sleeping position: On your stomach

Not good, not good! Sleeping on your stomach is bad for your spine. Twisting your neck and face to the side all night on the pillow will cause aches and pains and further discomfort. It puts added pressure on muscles and joints that can snowball by irritating nerves, resulting in numbness and tingling.

Facedown keeps your upper airways more open. So if you snore and aren’t suffering from neck or back pain, it’s fine to try sleeping in this position.

The Centers for Disease Control and Prevention (CDC) reports that 30 percent of Americans have poor sleep habits. Many people toss and turn all night long. While this is not a healthy routine – bad sleep has been associated with obesity, heart disease, diabetes, and memory loss, as mentioned above – there are also other health problems that have been linked to certain sleep positions.

While sleeping on our sides may help clear out waste, there has been much debate about what side is best. Some sleep disorder experts suggest that sleeping on our left side is not good for our liver, lungs, or heart due to the unnecessary pressure this position puts on these organs.

The heart has received the most attention when it comes to sleeping. While there is no clear evidence to suggest sleeping on your right side is better if you are generally in good health, it has been shown that people with chronic heart issues do better sleeping on their right side, as opposed to their left. Studies have indicated that lying on the right reduces heart rate and blood pressure, which is especially beneficial when dealing with heart conditions. Just exactly why this happens is still under investigation. However, some medical researchers suspect when the right side is down, the heart is in a “superior position,” making it much easier to pump blood out.

Sleep specialists estimate that we spend one-third of our lives sleeping, so taking a look at current sleep positions and the possible health implications isn’t a bad idea for all of us. The National Sleep Foundation and many orthopedic surgeons tell us that 80 percent of the population will have back or neck problems at some point in our lives, often due to the way we sleep.