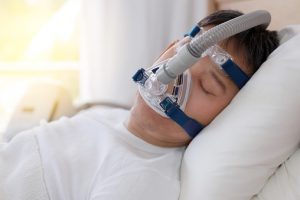 Sleep apnea patients use a CPAP device to improve symptoms of the sleep disorder. Continuous positive airway pressure (CPAP) treatment is delivered through the use of a mask worn while the individual sleeps. The mask provides continuous air through the nose or mouth to keep airways open from better sleeping. Research now suggests that this treatment may also benefit individuals with epilepsy.

For the study, of the 197 patients with epilepsy, only 75 of them did not have sleep apnea. Poor sleep is a risk factor for seizures and frequency of seizures tend to be higher among patients who suffer from poorer sleep.

Lead investigator Dr. Thapanee Somboon explained, “Sleep apnea is common in people with epilepsy, but few physicians screen for it. All patients with epilepsy should be checked for sleep disorders, including insomnia and sleep apnea because there are effective treatments.”


A group of 122 patients had both epilepsy and sleep apnea and 72 of them used a CPAP device to treat sleep apnea.

Many patients with epilepsy are often not aware that they have sleep apnea as well so they may not be getting the proper treatment they need, not only to treat sleep apnea but as a means of reducing their seizures. If you are a patient with epilepsy or know someone who has it, it may be worth it to undergo a sleep test to uncover any possible sleep disorders or problems as a means of reducing the frequency of seizures.