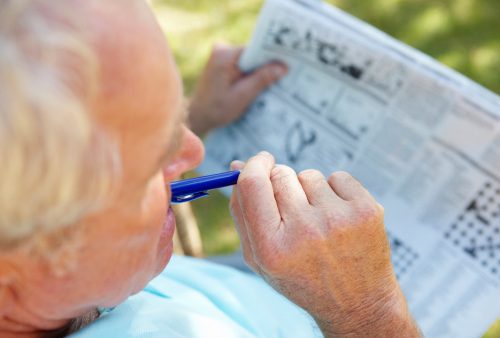 If you’re over the age of 50, then memory problems are something of a concern for you. Unfortunately, as we age, our brains don’t stay as sharp as they once were. For some, this mild cognitive impairment can eventually lead to Alzheimer’s disease or dementia.

There are currently 5.4 million Americans suffering from Alzheimer’s disease. As elderly populations continue to increase, so does the percentage of people with Alzheimer’s.

You may not know this, but the brain is a muscle. Like any muscle, it needs to be engaged and used to stay strong. The phrase of “use it or lose it” definitely holds true regarding your brain. So, if you’re the type to not engage your mind even over the age of 50, then you are setting yourself up for a higher risk of memory problems.
The good news is that it doesn’t take much to get your brain working again. Researchers found something as simple as puzzles are enough to have your brain feeling 10 years younger.

British researchers conducted a large online study to determine brain function in those over the age of 50. Data was collected from over 17,000 people, which makes this one of the largest studies of its kind.
The tests used for the study helped determine whether humans can maintain brain health by performing certain repeatable activities.

The researchers determined that habitually working on puzzles helped adults over the age of 50 maintain brain health, keeping it similar to those ten years younger.


The researchers suggested that the more you challenge and engage your brain, the healthier it will be. Stronger connections become formed in the brain as you work it. On the other hand, lack of usage of the brain can cause it to become weak, contributing to memory and thinking problems.

Keith Wesnes, professor of Cognitive Neuroscience at the University of Exeter Medical School, wrote, “We found direct relationships between the frequency of word puzzle use and the speed and accuracy of performance on nine cognitive tasks assessing a range of aspects of function including attention, reasoning, and memory. The performance was consistently better in those who reported engaging in puzzles, and generally improved incrementally with the frequency of puzzle use.”

Another growing body of evidence that affects brain health is lifestyle habits. Many studies have pointed to the fact that poor lifestyle habits, including eating unhealthy, not exercising, being overweight, smoking, and being stressed, contribute to a higher risk of Alzheimer’s disease. Therefore, treating your body badly can go a long way in deteriorating your brain health.

The researchers suggest that avoiding negative behaviors can go a long way in reducing the risk of an unhealthy brain.