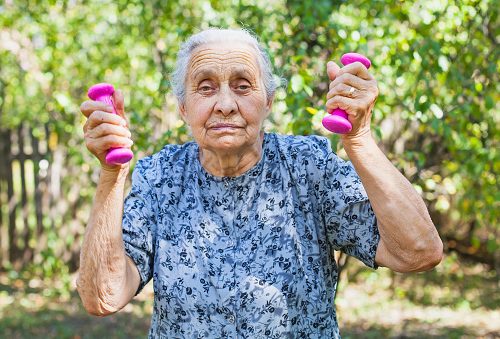 Inflammation is kind of complicated because at first, it’s actually good for us, but overtime, it can become quite detrimental. When we develop an illness or injury, inflammation works to protect the body. But if this inflammation becomes chronic, it has the opposite effect and has negative consequences.

Chronic inflammation has been linked to several different illnesses and conditions, and the latest findings suggest that it could be responsible for loss of muscle mass among seniors.

The study found that elevated levels of the inflammation marker CRP in the blood may be responsible for loss of muscle mass.

Muscle mass loss typically begins at the age of 40 and continues as we age. Researchers estimate a 10 percent loss in muscle mass within 10 years. Loss of muscle can lead to an increased risk of falls, fractures, and broken bones, as weak muscles have a harder time supporting the body.

Researcher Fawzi Kadi explained, “We wanted more specifically to examine the correlation between CRP, an inflammaging marker, and muscle mass in elderly persons.”

Measuring C-reactive proteins (CRP) can help with inflammaging and detecting illness in the body. The study included women aged 65 to 70 and researchers found a link between higher levels of CRP and lower muscle mass.


Fawzi Kadi added, “We were able to see that muscle cells exposed to CRP reduced in size. These are new findings which explain the causal link between elevated CRP values and reduced muscle mass. Researchers have previously only been able to find a correlation between the two, using large population studies.”

The researchers managed to uncover the role which CRP plays in muscle cells protein synthesis. “Muscles are our main protein depots. We saw that CRP interferes with the protein synthesis in the muscle cells, hence contributing to the loss of muscle mass,” continued Kadi.

“A mechanism which explains the connection is of great significance for both preventive measures and drug development. What is interesting is that inflammaging is a process quietly at work. If we can tackle inflammaging in time, are we then able to postpone the development of a number of chronic diseases?” concluded Kadi.

Having a greater understanding of the loss of muscle mass opens up new areas of treatment for muscle mass decline.

Inflammation in the body decreased by 20 minutes of exercise daily: Study