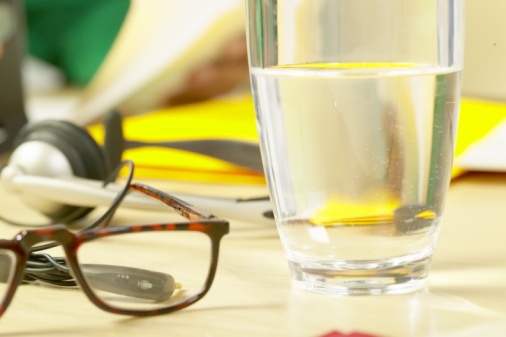 While we are constantly told how important it is to drink water to stay hydrated for physical health, here’s a new reason why you should drink it regularly:  studies show that water intake has a significant effect on mental performance as well. Whether you’re taking an exam, or simply sitting down to read a newspaper, here’s why including a glass of water by your side could make all the difference.

In December 2012, the journal Appetite published a study that investigated the effects of drinking supplementary water during the school day on the mental performance of children living in a hot climate. The investigation involved 168 children aged 9 to 11 and the children were divided into two groups – a control group and a group that received water supplementation. Urine samples were used to monitor the children’s hydration and levels of fatigue and vigor. As well, overall mental performance was assessed. The researchers found that the vast majority – 84 percent – of the children in the study were in a state of mild dehydration at the beginning of the school day. Auditory number span tests revealed that the poor hydration levels, found in the majority of the children, compromised their mental performance capabilities.

A separate study assessing the connection between hydration and mental performance found that hydration is equally important in adults. The study, which was presented at the British Psychological Society Annual Conference in 2012, included 447 undergraduate students. It examined the water drinking habits of the students during exams. The researchers found that the students who were further advanced in their university degree were much more likely to bring drinks into their exam than the students who were in their first year of University. The researchers also found that the students who brought water into the exam performed better than the students who did not bring water. According to the lead researcher of the study, Chris Pawson, “the results imply that the simple act of bringing water into an exam was linked to an improvement in students’ grades. There are several physiological and psychological reasons that might explain this improvement with water consumption.”

The explanation for why water enhances mental performance is likely multifaceted. First of all, drinking water helps to reduce anxiety, which is known to negatively affect mental performance.  Drinking water provides a momentary distraction, which can help break a chain of anxious thoughts and allow the mind to refocus on the task at hand, resulting in improved mental performance. In addition, studies have found that about 75 percent of the American population is in a chronic state of mild dehydration. Given the fact that water is the largest constituent of the human body and essential for the proper functioning of every cell, tissue and organ in the body, it makes perfect sense that mild dehydration would affect our mental performance and that restoring hydration levels would optimize brain function. In fact, studies have confirmed that even a mild restriction of fluids increases feelings of fatigue, decreases concentration and alertness, and reduces brain function by at least 10 percent.

Unfortunately, thirst can be an inaccurate way to measure hydration levels, as you may be dehydrated without even feeling thirsty. The best way to ensure proper hydration and thereby optimize mental performance is to consume water regularly throughout the day, cut-out caffeine, and monitor the color of your urine. Your urine should be a pale shade of yellow. If it is dark, it is often an indicator that you are dehydrated.