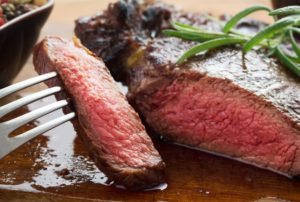 For those who have been consuming only white meat because of high cholesterol levels present in other meat, a new study may bring lean red meat back to your table. New research published in the American Journal of Clinical Nutrition is raising questions about red meat and cholesterol.

Study senior author Ronald Krauss, MD, spoke about the findings of the study. “When we planned this study, we expected red meat to have a more adverse effect on blood cholesterol levels than white meat, but we were surprised that this was not the case – their effects on cholesterol are identical when saturated fat levels are equivalent.”

In the study, 113 adults were randomly assigned to one of three diets for one month: rich in lean cuts of beef, lean cuts of chicken, or turkey or plant proteins. Each month, all the participants had their diet changed so that they ended up trying all three diets. The only difference was that half the participants were always kept high in saturated fat, with the other half eating a low-saturated fat diet.

After each month, the participants’ LDL cholesterol levels were measured. “Keeping all else constant — even the level of animal fat — the levels were higher on both sources of meat compared to the nonmeat diet,” Krauss noted.

The research team also found that both red and white meat increased amounts of large LDL in comparison to diets that did not include meats. This study helped to show that using standard LDL cholesterol levels as the measure of cardiovascular risk may lead to overestimating the risk for meat and saturated fat intake. This is because standard LDL cholesterol tests may only reflect levels of larger LDL particles.

Krauss explained the findings, “Our results indicate that current advice to restrict red meat and not white meat should not be based only on their effects on blood cholesterol levels. Indeed, other effects of red meat consumption could contribute to heart disease, and these effects should be explored in more detail to improve health.”

Nutritionists agree that the key to takeaway from this study is to watch out for saturated fat, no matter the protein source. Consumption of red meat has become unpopular in the last few decades due to concerns about its link to heart disease, but this study shows that white meat can offer the same risk. Non-meat proteins such as dairy, vegetables, and legumes such as beans showed the best cholesterol benefit and should be included more in a daily diet.