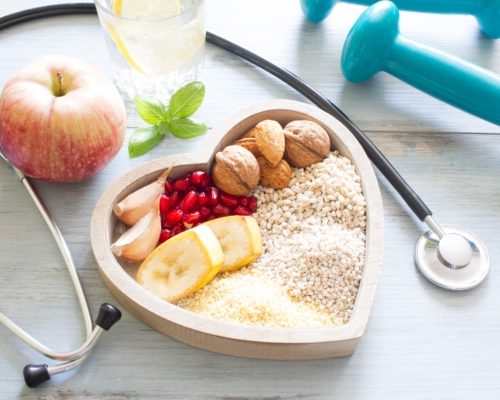 High levels of LDL cholesterol can cause plaque formation along the artery walls, causing them to become harder. Continuous buildup of LDL cholesterol in the arteries can cause the passageway for blood flow to become narrow. When this occurs, the heart must work harder in order to supply the body with adequate oxygenated blood. This adds stress to the heart along with damage, increasing one’s risk of heart attack.

If parts of this cholesterol plaque break off from the artery wall and travel to the brain, it can lead to a blood clot leading to a stroke.

As you can see, it is important that you reduce your LDL cholesterol to prevent health complications. Below you will find natural cholesterol reducers that can help you achieve this goal.

Oats: Changing you morning meal might be the simplest way to whittle down your LDL cholesterol (the bad kind). By taking two servings of oats, you can lower LDL by 5.3 percent in only six weeks. Oats contain beta-glucan, which plays a key role in removing LDL cholesterol from the body and excreting it.

Nuts: A study shows that people lowered their total cholesterol by 5.4 percent and LDL cholesterol by 9.3 percent by taking 1.5 ounces of walnuts six days a week for one month. Details of the study can be gleaned from the American Journal of Clinical Nutrition. And just to make it easy for you, 1.5 ounces is about a shot glass and a half.

Tea: Tea contains a lot of antioxidants to fight inflammation, and in some cases even fights cancer. Not many people know, however, that tea is also a great defense against LDL cholesterol. According to research conducted with the USDA, black tea has been shown to reduce blood lipids by up to 10 percent in only three weeks.

Beans: Researchers at Arizona State University Polytechnic found that adding ½ cup of beans to soup lowers total cholesterol, including LDL, by up to eight percent. The fiber content in beans plays an important role in limiting the absorption of dietary cholesterol.

Olive oil: This staple ingredient of the Mediterranean diet has found its way to the shelves of grocery stores worldwide. The reason? It is full of heart-healthy monounsaturated fatty acids, which can help lower LDL cholesterol. Olive oil has the added benefit of helping keep your waistline where you want it to be.

Strawberries: A research team set up a study introducing 500 g of fresh strawberries daily into the diets of 23 healthy volunteers. The volunteers were subjected to blood tests before and after a month of maintaining this new diet.

The results of the study, published in the Journal of Nutritional Biochemistry, show that the level of bad cholesterol fell to 13.72 percent. In addition, the total amount of cholesterol and triglyceride levels fell to 8.78 percent and 20.8 percent, respectively. Interestingly, the levels of HDL “good” cholesterol remained unchanged.

Barley: A study reviewed 14 clinical trials conducted in seven countries. This was the first study to look at the effects of barley on both LDL and HDL cholesterol. Research scientist Dr. Vladimir Vuksan said, “Barley’s positive effect on lowering cholesterol is well-documented and has been included in the Canadian strategy for reducing cardiovascular risk. Health Canada, the FDA, and several health authorities worldwide have already approved health claims that barley lowers LDL cholesterol, but this is the first review showing the effects on other harmful lipids.”

Avocado: This vegetable/fruit is a great source of heart-healthy monounsaturated fat, a type of fat that may actually help raise HDL cholesterol while lowering LDL. And, more than any other fruit, this delectable item packs cholesterol-smashing beta-sitosterol, a beneficial plant-based fat that reduces the amount of cholesterol absorbed from food. However, too much avocado can add to the waistline.

Based on their review of 10 avocado studies involving 229 participants, the researchers uncovered that consuming one or one and a half avocados a day worked to significantly reduce cholesterol levels. Furthermore, avocado intake worked to lower LDL cholesterol when the fruit was substituted for other sources of fat.