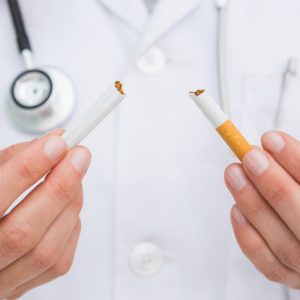 Smokers are more likely to experience problems after total hip or knee replacement surgeries than their non-smoking peers, according to a new study from New York University’s Langone Medical Center. The study found that patients who quit smoking before undergoing a joint replacement procedure had better surgical outcomes and were less likely to require follow-up surgeries or experience complications.

Researchers gathered over 100 volunteers who were slated to undergo either total knee or hip replacement surgery and were current smokers. These participants were enrolled in a smoking cessation program that included four counseling sessions conducted via telephone as well as a nicotine replacement therapy as needed.

Less than 50 participants completed the full program before their surgery, but those who did reduced their smoking by an average greater than 10.5 cigarettes per day. Those who started the program but did not see it through fully were able to cut their smoking by approximately five cigarettes a day, while those who did not try to quit using the program smoked two fewer cigarettes per day before their surgery. Those who had managed to quit smoking before their surgery not only had a better surgical outcome, but were also less likely to experience post-surgery issues such as hospital readmission, surgical site infections, blood clots, pneumonia, stroke, and urinary tract infections.
Patients who smoke and undergo a total joint replacement surgery were found to be 50 percent more likely to have complications during surgery than non-smokers, while those who had consumed tobacco within a month of their surgery were twice as likely to develop a deep surgical infection than those who didn’t.

The results of this study suggest that enrolling smokers in a smoking cessation program before surgery may be an effective method of bettering their surgical outcome and lowering their risk of experiencing complications. Professor of orthopedic surgery at NYU Langone and senior author of the study Dr. Richard Iorio explained, “By delaying surgery in high-risk patients until they enroll in a program to quit smoking, we are not only improving how the patient will do after surgery but eliminating some of the burdens on the health care system caused by poor outcomes and increases in costly reoperations.”