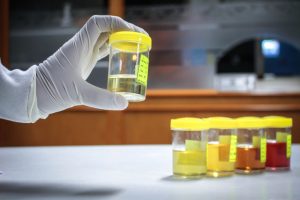 Pyuria is a condition in which excess white blood cells, or pus, are present in the urine. Urine will appear cloudy and can also be a sign for a urinary tract infection (UTI). Pyuria can also be an indication of a sepsis infection or pneumonia in older adults.

Some people may experience sterile pyuria in which white blood cells are present in the urine, but there are no bacteria or microorganisms. Sterile pyuria is often caused by a sexually transmitted disease or medications.

What are the causes of pyuria?

A UTI is the most common cause of pyuria, as bacteria in the urinary tract can lead to pus being excreted out in your urine. Other causes of pyuria include:

Experiencing pus in your urine can also be the result of long-term medication use. Drugs such as aspirin, ibuprofen, and combination antibiotics can lead to this condition if taken for extended periods of time.

Pyuria symptoms: The role of UTI

Symptoms accompanying pyuria depend on the underlying cause of the condition. For example, if a UTI causes pyuria, you may also experience a burning sensation when urinating, pain, and increased frequency of your bathroom trips. General symptoms of pyuria due to any cause include cloudy urine, foul smell, increased urination frequency, discomfort when urinating, and in some cases, fever.

Pregnancy is a time of many changes in the female body and pyuria can be one of them. A routine urinalysis may show pyuria when testing the urine, but this is a common occurrence during pregnancy and due to excess vaginal discharge contaminating the results.

While the most common cause of pyuria is a UTI, pregnant women generally don’t present with the typical symptoms of the infection. Any abnormalities found on urine testing will be further investigated by your doctor with the necessary treatments carried out if need be.

In most cases, discovering pus in the urine of pregnant women is not of a concern, but it is imperative to rule out a UTI, as it may affect the unborn fetus. Untreated UTIs may lead to premature birth or low birth weight.

Women are generally considered more at risk for developing pyuria compared to men. Older adults are also more likely to get it compared to their younger counterparts, with older women being having the greatest risk overall.

As older women go through their menopausal transition, pyuria may develop in association with a natural drop in estrogen levels. Menopausal women are also at higher risk of developing UTIs.

Increased sexual activity is also a recognized risk of pyuria, as contracting a sexually transmitted infection can lead to pus in the urine.

Having the symptom of pyuria is often a sign of another form of infection elsewhere in the body, with the pus excreted being the remnants of your immune system fighting off a perceived invader. Depending on the underlying condition, not looking further into the signs of pyuria can lead to further health complications.

Untreated infections can develop into blood poisoning and even organ failure. If a urinary tract infection is not treated with the appropriate medication, permanent kidney damage is a real possibility.

Treatment and diagnosis of pyuria

Pyuria diagnosis involves uncovering the underlying cause of the condition. This is commonly done through a urinalysis, or a urine sample. Diagnosis is confirmed if there are more than six neutrophilic white blood cells per high power of unspun, mid-stream urine.

Other diagnostic tests may include MRI, CT scan, ultrasound, and intravenous pyelogram.

Treatment is also targeted to address the underlying cause of pyuria. If a person is asymptomatic or if no infection was found, then treatment will not be administered. Pyuria is commonly treated with antibiotics, but your doctor will ultimately decide on the most suitable mode of treatment based on your diagnostic results.

What your urine color and urine odor say about your health