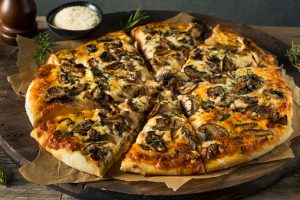 Oh, pizza. Who doesn’t love pizza? With a crispy crust, gooey cheese, and frankly, anything else you love can be added on top to make a delicious meal. Pizza, in general, isn’t the healthiest of meals, but specific toppings you put on it can be.

Researchers at Penn State University found that if you’re going to dress your pizza, make sure you include mushrooms, as they are packed with powerful antioxidants that can help fight aging and improve overall health.

The study found that mushrooms are packed with two powerful antioxidants that work wonders against aging, as they fight off toxic free radicals that can speed up the aging process. It’s important to note that different mushrooms contain different levels of antioxidants, so not all mushrooms are equally as beneficial for aging.

Study lead researcher Robert Beelman explained, “What we found is that, without a doubt, mushrooms are the highest dietary source of these two antioxidants taken together, and that some types are really packed with both of them.”


“There’s a theory – the free radical theory of aging – that’s been around for a long time that says when we oxidize our food to produce energy there’s a number of free radicals that are produced that side product of that action and many of these are quite toxic. The body has mechanisms to control most of them, but eventually enough accrue to cause damage, which has been associated with many of the diseases of aging, like cancer, coronary heart disease and Alzheimer’s,” continued Beelman.

Therefore, being able to replenish antioxidants through diet is a means of reducing damage caused by oxidative stress.

Unlike other foods that may lose some of their nutrients through the cooking process, mushrooms high in antioxidants hold on to these antioxidants even through cooking so you can add them on pizza or in other foods you eat.

Health benefits of mushrooms have been known for quite some time now. For example, they are known to boost your immune system, making them a great food to stock up on during the fall and winter season. Finding easy and delicious ways to incorporate mushrooms into your diet can help you to maintain overall good health all while fighting the hands of time.