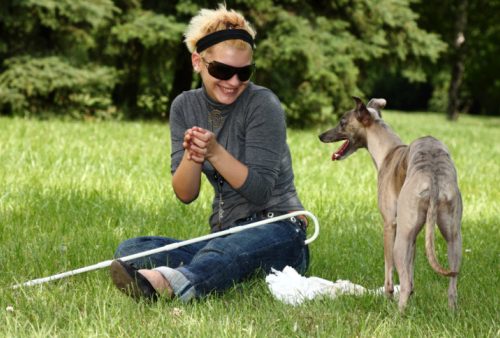 A new study led by researchers from the University of Geneva (UNIGE) examines whether people who are born blind express emotions differently than seeing people.

It is said that 90% of human interaction is non-verbal, including how we express our emotions to those around us. Even babies can detect differences in facial expressions before they learn how to speak. It is widely believed that this is due to the principle of imitation: monkey see, monkey do. In this way, babies and children learn how to express their emotions by observing their parents and peers, and do the same.

For instance, if my mother scrunches her eyebrows when she is angry or confused, then that must be the correct way to express those emotions. But how can we be sure that human expressions are not linked to emotions based on other factors, such as genetics, or something more inherent to our being, like the ability to breathe?

Recently, researchers at UNIGE performed a meta-analysis study on this very question. They examined data from 21 different studies, done between 1932 and 2015, in the hopes of discovering why these universal codes for emotion exist.

The universal expression of emotions

The studies they analyzed were all performed on a certain group of people: people who were born blind. Surely, if someone who has never been able to see still gives off the same facial expressions when emoting as seeing people do, then the expression of emotions is something far more innate than monkey see, monkey do. If not, then the principle of imitation must be true. Here is what they found.

In the studies performed before 1980, the researchers focused almost entirely on examining the facial expressions of blind babies, to compare their reactions to babies with sight. They found that the unseeing and seeing babies all expressed similar emotions through similar facial expressions, thus reinforcing the idea that emotion is inherent and universal among humans.

From the ‘80s onward, new technology allowed scientists to use more accurate methods of examination through machines that could detect muscle movements in the face. These studies showed similar findings: “When a blind person spontaneously expresses an emotion, such as surprise, he or she uses the same muscles in other words, his or her reaction is similar to that of a person who can see.”

But something interesting was discovered in the studies where scientists asked the blind participants to express emotions on command. Their reactions were different than what was expected.


Are facial expressions innate or learned?

The spontaneous muscle movements that matched those of a seeing person and experienced by someone without sight when expressing an emotion in the moment shows that, in some ways, our brains are programmed as to how our bodies should express emotions. The inability of the blind participants to express these same emotions in the same ways when asked shows that human interaction and the imitation principle still form an important part of how we learn conventional social interactions.

Further studies are now underway to see how children can employ these same imitation-style learning techniques without sight. For example, using models with emotions molded into them for the children to then feel and match by feeling their own faces.

Related: Three technologies improving quality of life for those with low vision, blindness