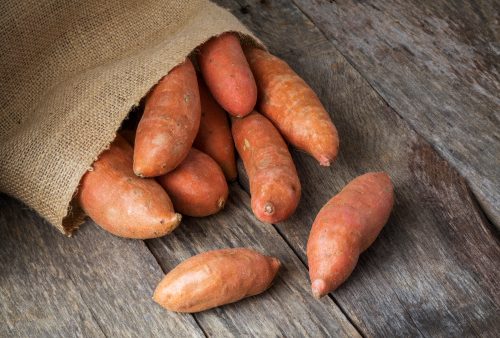 Can a potato a day can keep blindness away? Well, if the vitamin A deficiency combative strategy of FEED THE FUTURE is any indication, eating a lot of orange-flesh sweet potatoes seems to be a step in the right direction. Deficiency of vitamin A is the leading cause of preventable blindness in children. As per WHO this common deficiency also increases the risk of disease, and even death from severe infections. In spite of repeated education about the perils of vitamin A deficiency, and media-campaigns targeted at battling this scourge, about 250 million preschool children across the world are vitamin A deficient. A huge chunk of that number belong to Africa and Southeastern Asia.

Fortunately, the United States has taken many steps to prevent vitamin deficiency. Today grocery shelves are stacked with vitamin-fortified foods, like milk and cereals. To take it one step further, crops themselves are being fortified with vitamins via a process aptly termed bio-fortification. In this process nutrient-rich varieties of crops are developed using molecular techniques or conventional breeding. The end result – produce that provides better nutrition, from the seed up.

The success of bio-fortification in the U.S. opens up promising avenues to combat vitamin A deficiency in South Africa. In South Africa, sweet potatoes are a traditional crop that is popular with rural families. The researchers believed it would be a great idea to develop a local variety of sweet potato which has good yield, high dry mass and all the required taste attributes, and use it to fight off the scourge of vitamin A deficiency.

Bio-fortification of sweet potatoes is a unique method to fight vitamin A deficiency in South Africa. The good thing about this vegetable is that its orange flesh contains high levels of beta-carotene, which is converted into vitamin A by our bodies.  And as sweet potatoes are also a favored staple of the South African diet, it would be easy to fortify the nation with vitamin A.

According to Sunette Laurie, a senior researcher with the Agricultural Research Council in Pretoria, South Africa, for the project to be successful, getting the right sweet potato is critical.  “Africans prefer sweet potatoes with a higher dry matter content, a firm texture and a sweet taste,” said Laurie. “We had to start breeding projects to get the right attributes into the varieties.” Importing sweet potatoes was not an option as the imported varieties were either too moist, low in dry matter content or had low yield and were not able to adapt to the local growing conditions.

Along with her colleagues, Laurie tested 12 varieties of sweet potato in three different growing areas: humid subtropical, drier subtropical and temperate. After a lot of sampling and research, two varieties, Impilo and Purple Sunset, turned out to have all the attributes required to please the South African palate. However Impilo had less beta-carotene, and Purple Sunset had less adaptability to the different growing conditions. Further research provided another winner – Bophelo, which has higher levels of beta-carotene than Impilo and seems to have a more pleasing taste.

All three varieties are widely accepted by farmers and consumers. A 4.4-ounce serving of each of these varieties provides more than 100% of the daily requirement of a child in the four- to eight-year-old age range. In fact, Purple Sunset provides 261% of the daily vitamin A requirement. The research and development of bio-fortification will be very useful down the road in preventing vitamin A deficiency.

The team is now working to bolster and spread the use of these sweet potatoes. With the aid of local authorities, they are encouraging processing facilities to produce flour, bread, muffins and other products from sweet potatoes; all of which can help combat vitamin A deficiency.

In the meantime, the researchers are continuing to breed better varieties of sweet potatoes. Their aim is to develop varieties that have a better tolerance to local diseases and insects, so the farmers will take to them easily and the country can benefit in the long run.