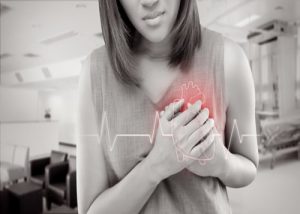 It is common for people to mistake panic attacks for heart attacks. Here we’ll take a look at the differences between the two.

The fact is, panic attacks and heart attacks do have some similarities in terms of symptoms, including chest pain. But they otherwise are two distinct medical reactions. Before we look at the specifics of panic attacks vs. heart attacks, let’s define these health issues.

When we talk about the difference between heart attack and panic attack, it should be obvious that one is a medical emergency while the other is not. The problem is that when a panic attack occurs, it can be scary and feel like an emergency.

People who have suffered such attacks report that they feel as if they have lost control and might die. While some people have just one or two panic attacks in their lifetime due to a stressful situation, others experience recurring panic attacks.

Those who suffer from panic attacks and feel frightened or stressed out for long periods of time may be diagnosed with panic disorder. Panic attacks are not life-threatening; however, they can impact the quality of a person’s life in a big way.

Heart attacks are a medical emergency. A lack of blood to the heart can cause serious damage to the heart muscle and it can be life-threatening.

So how do you know if you’re having a panic attack or a heart attack? Sometimes, it can be hard to tell. The difference between heart attacks and panic attacks can be subtle.

When someone is having a heart attack with chest pain, that pain is usually described as “crushing.” It’s a pain that tends to begin in the middle of the chest but can travel down the left arm and into the back. In some cases of heart attack, the pain even extends into the neck and jaw.

This pain remains for about five minutes and can be accompanied by a tingling sensation in the left arm. It isn’t unusual for someone in the middle of an attack to break into a cold, clammy sweat or feel sick to their stomach and vomit. Anyone who experiences these symptoms should call 911 immediately.

People who are having a panic attack can feel chest pain, shortness of breath, numbness or tingling sensations, nausea, and sweating. These symptoms usually peak after about 10 minutes. It is important to note that the chest pain is not “crushing” like the pain described by heart attack sufferers. Additionally, any tingling or numbness can be felt in both arms, not just the left. Some people even notice these sensations in their legs and toes.

When it comes to panic attack vs. heart attack, those who are having panic episodes focus on their fears, such as losing control, while people having a heart attack usually focus on the “crushing” pain.

Differences in the Causes of Panic Attacks and Heart Attacks

There is no single cause of panic attacks, although there are several factors that we know can contribute to both panic attack causes and panic disorder. Some of those factors are listed below.

Some studies suggest that panic attacks are connected with the body’s natural “fight-or-flight” response to danger. If you were approached by a threatening animal, such as a bear or crocodile, your heart rate, and breathing would likely speed up as you prepare for the life-threatening situation. These are the same kind of reactions people experience with a panic attack. The only difference is that there is no obvious danger staring at you.

If you have a family history of panic attacks or panic disorder, you’re at a higher risk of panic attacks. Other risk factors include major stress, such as a death or serious illness of a loved one; a traumatic event, like a sexual assault or car accident; and major life changes, including divorce or the arrival of a new baby. Smoking or excessive caffeine intake can also increase the risk of panic attacks.

Here are the most common heart attack risk factors:

Causes of panic attacks and heart attacks do share one factor — stress. If you’re having difficulty coping with stress and panic attacks, it’s important to get help.

How Are Panic Attacks and Heart Attacks Diagnosed?

Usually, panic attack diagnosis starts with a doctor eliminating other conditions that might mimic panic symptoms, including a heart attack.

To help narrow down the diagnosis, a full physical examination will be conducted. Some of the procedures outlined below may also be carried out.

In most cases, the patient will fill out a psychological questionnaire. It will ask about alcohol or other substance abuse as well as stressful situations like fears or relationship issues.

When it comes to heart attacks, your primary care physician should be screening you for heart issue risk factors during regular physicals. If and when there is a situation where someone shows symptoms of heart attack, he or she will be asked to describe the symptoms. Blood pressure, pulse, and temperature will be taken.

Here are some of the tests that are conducted in cases where a heart attack is suspected:

In severe cases of a panic attack, a sufferer can head to the emergency room for acute panic attack treatment. Oxygen will likely be administered while vital signs are monitored. During the hospital visit, medication may be given intravenously. The treatment will be explained and the patient will be reassured that everything is okay.

When the panic episode subsides, ongoing treatment may involve psychotherapy. Depending on the severity of the symptoms, medications may also be suggested.

When it comes to heart attack treatment, the sooner the therapy is administered, the more likely you are to have a positive outcome. This is because, following a heart attack, more heart tissue deteriorates with each passing minute. To lower the risk of more damage, blood flow has to be quickly restored.