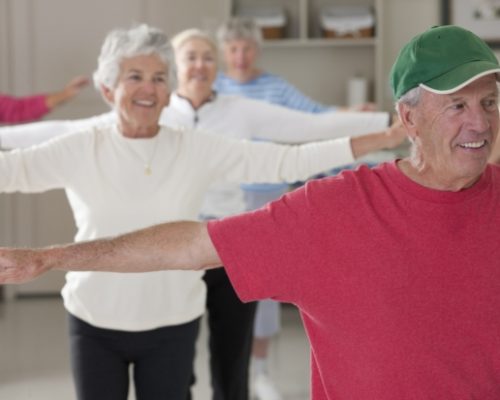 Older adults with mild cognitive impairment, a condition that increases the risk of developing Alzheimer’s disease, can improve brain volume and cognitive function with aerobic exercises. Lead investigator Laura D. Baker explained, “Even over a short period of time, we saw aerobic exercise lead to a remarkable change in the brain.”

The study included 35 adults with mild cognitive impairment (MCI) who took part in randomized, controlled exercise intervention trials. Participants were divided into two groups: 16 partook in aerobic exercises while the control group underwent stretching exercises. MRI scans were taken from all participants and then compared using conventional and biomechanical metrics to measure the change in both brain volume and shape.

Co-investigator Jeongchul Kim explained, “We used high-resolution MR images to measure anatomical changes within areas of the brain to obtain both volumetric data and directional information.”

Brain volume increased in both groups in grey matter regions of the brain which work to support short-term memory.

The stretching group had a local atrophy in the fibers of the brain’s white matter. This is partially related to brain volume loss, albeit not always. Dr. Kim continued, “Directional changes in the brain without local volume changes could be a novel biomarker for neurological disease. It may be a more sensitive marker for the tiny changes that occur in a specific brain region before volumetric changes are detectable on MRI.”

Those in the aerobic group saw greater improvements on cognitive performance tests, compared to the stretching group.

The researchers concluded that any type of exercise is beneficial for the brain, but aerobic activity may be associated with greater improvements in cognitive function.


Effect of exercise on brain health

The effects of exercise on brain function start with triggering of the production of a protein called brain-derived neurotrophic factor, or BDNF, first discovered by researchers at University of California-Irvine (UCI). This is the essential protein which helps support the growth of existing brain cells and the development of new ones. Basically, you lace up and get on the tennis court and you’ve stimulated brain cell regeneration by exercise. BDNF is like a natural brain fertilizer.

With aging, however, BDNF levels fall. The decline is considered one reason brain function deteriorates in the elderly. Certain types of exercise, namely, aerobic exercises that get your heart pumping, are thought to counteract these drops and help restore youthful levels to better protect the aging brain and offset dementia.

There’s a growing body of research that has determined that exercise acts on multiple levels in the brain. Here’s how it works. The brain’s wiring depends on the integrity of the brain cells or neurons, as well as the connections between the neurons, or the synapses. With aging, the synapses are lost or break down.

UCI’s Institute for Memory Impairments and Neurological Disorders has studied the effects of exercise extensively on the brains of mice. Researchers have found that exercise increases the number of synapses and also stimulates the brain to develop more neurons in the hippocampus, a key area for learning and memory formation and a target of decline in Alzheimer’s disease.