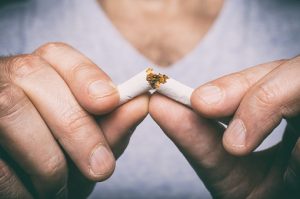 Anti-smoking public service announcements that utilize fear and guilt to convince smokers to quit may be less effective than softer, nostalgia-based announcements, according to a new study from Michigan State University.

The use of nostalgia-evoking imagery and content is often used to promote and sell consumer items, and researchers set out to determine if this tactic could be employed to also promote healthier pro-social behavior. Doctoral candidate Ali Hussain, one of the authors of the study, explained “A lot of no-smoking messages are centered around fear, disgust, and guilt. But smokers often don’t buy the messages and instead feel bad about themselves and the person who is trying to scare them.” These aggressive anti-smoking advertisements may cause resentment in smokers, rather than inspire motivation to quit. While the health risks are well-documented and reported, many smokers may choose to reject or avoid viewing anti-smoking campaigns, especially ones that are meant to frighten and disgust as they are unpleasant.

To combat this, Hussain approached anti-smoking messages from a different angle, instead focusing on positive emotions associated with viewers’ memories in the same way that some advertisements do. He created a PSA that focused on childhood memories and growing up, with the speaker introducing smoking as something he was shown that he will never forget and wishes he could change. The focus then shifts on creating new, wholesome memories that can be looked back on, and ends with the positive message, “You can quit smoking today!”
Hussain and his team gathered a group of smokers between the ages of 18 and 39 and showed them either the new, positive PSA or a standard control one. Those who viewed Hussain’s PSA reported more nostalgic emotions and stronger negative attitudes towards smoking, suggesting that this new approach may prove to be more effective than the existing standard. Professor Maria Lapinski commented on these results, stating “Our study, which to our knowledge is the first of its kind, shows promise for using nostalgic messages to promote pro-social behaviors. We know that policy and environmental changes have an influence on smoke and this study indicates persuasive messages can influence smoking attitudes.”

Smoking is the leading cause of preventable disease in the United States, meaning this research could prove beneficial in lowering the death and disease rate if it is used to develop more effective and engaging PSAs that inspire people to quit.

Osteoporosis and fracture risk in male smokers higher than in women