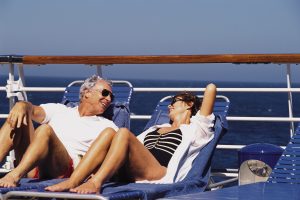 Norovirus outbreaks on cruise ships are not as common as we perceive, but it’s still important to understand norovirus infection complications along with incubation periods. The Centers for Disease Control and Prevention (CDC) stated, cruise ship vessels that are part of the Vessel Sanitation Program (VSP) are required to report gastrointestinal illnesses, which occur on the ship, as reported by medical personnel, up to 24 hours prior to docking in the U.S. when coming from a foreign destination. These reports must be submitted even if no cases are reported. Furthermore, if cases exceed two percent, a separate notification must be given.

An outbreak update from a cruise ship occurs when a ship is sailing between three to 21 days, is carrying over 100 persons, has three percent or more of passengers reporting diarrhea or symptoms of diarrhea, and if the outbreak is of public health significance.

A recent report from the CDC uncovered that cruise ship norovirus outbreaks are not as common as we believe them to be, and that rates of diarrheal illness have actually declined – aside from the 2012 headlines, which made the news.

Between 2008 and 2014, 172,810 of 73 million passengers who were aboard on a ship developed norovirus infection or diarrheal illness.

Norovirus is highly contagious, and it doesn’t take much to get sick from it. Proper hand-washing is your best defense against norovirus infection.

The findings from the researchers though tell a different story. Researcher Andreas Handel said, “I would have expected there to be a difference in something like a hospital setting or a difference depending on age groups. But when we analyzed the data, we didn’t see much of a difference.”

Norovirus can cause severe gastrointestinal discomfort along with diarrhea, nausea, and vomiting. Norovirus symptoms and infection are more severe in young children and seniors, but it is unknown how duration of symptoms and illness onset are affected by age and other characteristics.

The researchers explored previous data on norovirus outbreaks and collected details about the patients, setting, means of transmission, and any other relevant values.

Understanding time before the onset of illness and symptom duration is important for creating better control methods and evaluating the effectiveness of a potential norovirus vaccine in future.

As mentioned, norovirus is highly contagious, and even a small amount of exposure is still enough to cause illness. The most common way norovirus is transmitted is from an infected person to a healthy person. Once again, the virus has a two-day incubation period, and so if you come in contact with someone who appears seemingly healthy, they still have the virus, which can be easily passed on.

Norovirus can also be transmitted through consumption of contaminated food or water, or even coming into contact with fecal matter infected with the virus.

Additionally, coming into contact with surfaces and objects that have been contaminated can transmit infection, too. This is why practicing proper hygiene and continuously washing your hands is of utmost importance.

Being on a cruise ship not only exposes you to different viruses, but the close quarters increase the risk of virus transmission from person to person. Here are some preventative tips to ensure you enjoy your next ocean adventure and not end up enjoying only the four walls of your bathroom:

By practicing these tips on a cruise – and even in your everyday life – you can better prevent yourself from suffering the symptoms associated with norovirus.

The norovirus (stomach flu) can really put a damper on Thanksgiving, Christmas, and the holiday season, so the best way to avoid it is through prevention methods. The norovirus can occur at any time of the year, but most outbreaks tend to occur in the winter months – especially around Thanksgiving and Christmas. Continue reading…

Researchers from the University of Georgia found that contaminated food items can spread bacteria through the use of kitchen knives and graters. The study reveals that many consumers are unaware that kitchen utensils can spread bacteria. Lead author Dr. Marilyn Erickson said, “Just knowing that utensils may lead to cross-contamination is important. With that knowledge, consumers are then more likely to make sure they wash them in-between uses.” Continue reading…