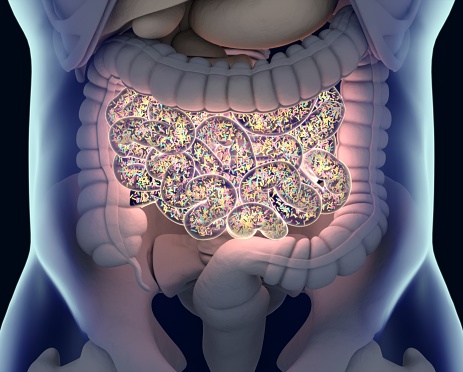 Your digestive tract is filled with millions of bacteria that help to break down and digest food to increase their absorption by the body. Some microorganisms are also vital for synthesizing vitamin B and K, needed for various metabolic and homeostatic operations.

However, this collection of bacteria has recently been linked to a neurodegenerative condition called multiple sclerosis (MS)—a condition that affects nearly 2.5 million people worldwide.

A new study has found that gut microbes play a role in the process of neurodegeneration that is characteristic of multiple sclerosis.

Disorder of the immune system

Multiple sclerosis is an autoimmune disorder that leads to demyelinating nerve damage. The nerves of the central nervous system are responsible for sending and receiving signals to and from the brain to the rest of the body.

Nerves are covered in a protective layer called myelin. In multiple sclerosis (MS), this layer is attacked by the body’s own immune system for unknown reasons. Symptoms often include problems with vision, muscle movement, and coordination. Currently, there is no cure for MS.

“The field has been very successful in identifying genes associated with susceptibility to MS, but I’ve never been satisfied with the amount of risk that we’ll be able to explain with just genetics. Even identical twins, who share the same genetic inheritance, only share an MS diagnosis about 35 percent of the time. It’s clear the genome is important, but environmental factors must also play a major role,” said Sergio Baranzini, Ph.D., a professor of neurology at UCSF and the senior author on the new study.

Environmental factors have also been suspected to play some sort of role in the development of MS, but this new study provides new evidence in that respect.


The guts relation to the immune system

The intestines share a close connection to the outside world and the immune system, with gut microbes demonstrated as having a direct influence on immune system function, according to many previously done studies.

This new study analyzed the gut microbiomes of 71 MS patients and 71 healthy patients as controls. The researchers found specific bacteria that were either more or less common in those with MS than those of the general population. But what they really needed to know is which bacteria was contributing the development of MS.

To address this, the researchers explored whether components of these bacteria could alter the behavior of human immune cells, either making them proinflammatory or anti-inflammatory using mouse models.

When introducing these three bacteria to the immune system of mice that otherwise lacked a microbiome, the researchers saw that A. muciniphila and A. calcoaceticus triggered inflammatory immune responses, while P. distasonis reduced it. However, when introducing all of these bacteria into a mouse with induced MS symptoms, they found that the animal lost key immune regulatory cells and developed a more serious neurodegeneration.

The researchers of this study hope their research could contribute to new therapies to treat multiple sclerosis.