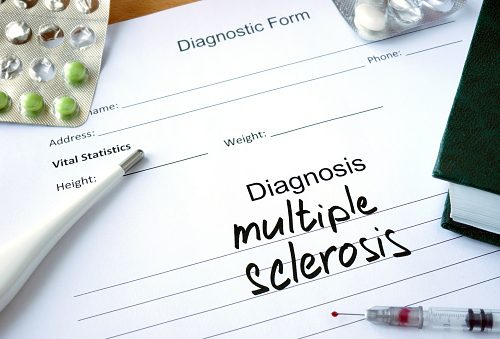 We often take for granted how easy it is for us to control our bodies. It’s something we don’t really think about at all. Our ability to willingly contract our muscles, see the world through our eyes, and even control our bowel movements are things that just happen effortlessly. However, there is a disease that has the potential to disrupt all of the normal human abilities mentioned plus so much more. It’s called multiple sclerosis (MS).

Multiple sclerosis is a demyelinating disease in which the insulating covers of nerve cells in the brain and spinal cord are damaged. This damage results in the interruption of the nervous systems internal communication, which disrupts normal functioning. It often leads to the wide range of potential signs and symptoms MS patients can present with, with no two patients exhibiting the same symptoms in the majority of cases. Symptoms range from physical, mental, and sometimes psychiatric problems—muscle weakness, vision problems, and trouble with coordination tend to be the most common. Treatment options are limited depending on the severity of the disease, with the management of symptoms and relapse prevention being the area of concentration.

Despite this mostly dreadful prognosis, trainer Garrett Stangel from Milwaukee, Wisconsin has made great strides to overcoming the depressive nature of the disease, opening his own gym for those with MS to work out and get the physical and mental benefit exercise provides. Stangel was inspired by others with MS who showed the drive to create their own personal workout areas after he worked for a corporate wellness program and met Dan Erechen, a victim of MS.

“I was inspired by what he was doing and I said, when I have my gym space, I’ll open my doors to the same program,” Stangel said.

People with MS from near and far have started attending Stangel’s free MS gym sessions, with some expressing their deepest appreciation for the tailored exercise classes. Some of the participants were very active until they were diagnosed and hit with the emotional weight of having a lifelong debilitating disease.

Al Graham of Brookfield, Wisconsin was quite the athlete before being diagnosed with MS, being an active runner and golfer his whole life. He admits that being diagnosed with MS four years ago broke him down.
“The last four years I couldn’t do anything,” Graham said. “because I thought I couldn’t do it! I come over here and Garrett is so excited: ‘Come on in, let’s see what you can do.’”
“The first day he had me doing things I didn’t know I could. It was a push-up on a windowsill. I used to do 50, 100 push-ups when I was young. Now I couldn’t do any—until Garrett said, ‘yes you can.’”

The beauty of the human spirit is that we have an innate desire to help each other, and that is exactly what Garrett Stangel set out do. He saw an issue and had the power to do something about. Despite the world being filled with incurable disease and sorrow, if we stay compassionate and caring to our fellow man and helping each other out, we as humans can be a form of treatment ourselves.