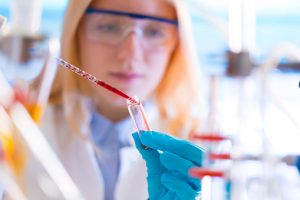 Breast cancer is an extremely prevalent disease. It is estimated that about one in eight U.S. women will develop the invasive form of cancer over their lifetimes. However, increased awareness and funding has helped improve screening and diagnosis of breast cancer and even aided in improved treatments, leading to increased survival rates of cancer, with deaths steadily declining.

A new study involving hundreds of researchers worldwide have propelled the field of breast cancer research, as 72 new genetic variants leading to its development have been identified.

Of these, 65 are common variants while the remaining six were found to specifically cause estrogen negative breast cancer that is resistant to commonly used breast cancer hormonal medication.

A cancer of many variations

Breast cancer is often discovered by women when they feel a lump on their breast, prompting them to see their doctor. There are several types of breast cancer that can present in a number of ways. Some are defined by hormone receptors to estrogen or progesterone while others have specific receptors known as HER2 fueling breast cancer growth.

It is not clear what causes breast cancer, but it’s suspected to be due at least in part to hormonal, lifestyle, and environmental factors. There are also several cases of inherited risk, with an estimated five to 10 percent of breast cancers being linked to genetic variants known as BRCA1 and BRCA2. These two genes are known for carrying a high risk of the disease.

The study in question utilized the talents of 550 researchers from nearly 300 different institutions across six continents. They pooled all of the knowledge and skills to analyze genetic data form 275,000 women, 146,000 of which were diagnosed with breast cancer.

“These findings add significantly to our understanding of the inherited basis of breast cancer. As well as identifying new genetic variants, we have also confirmed many that we had previously suspected. There are some clear patterns in the genetic variants that should help us understand why some women are predisposed to breast cancer, and which genes and mechanisms are involved,” said professor Doug Easton from the University of Cambridge, one of the lead investigators on the study.

Their combined work was able, for the first time, to show that the involved genes are often the same as those found altered in breast tumors and that the DNA within the cancer cells themselves become mutated. Additionally, with data collected from multiple regions, the researchers were able to make plausible predictions of the target genes.

The results of this study revealed a lot more about which genes are involved in the development of breast cancer, with previously unsuspected mechanisms leading to cancer being uncovered.

Perhaps one of the most important discoveries that came out of this collaboration was the identification of estrogen-receptor negative cancer genes. For those affected by this variant, hormonal treatments used to combat estrogen-positive breast cancer are ineffective, making it harder to treat.

This increased understanding of the biological basis of breast cancer may improve risk prediction, not only for the general population but also for those affected by rare variants. It could even potentially lead to better assessment, prevention, and treatment methods.