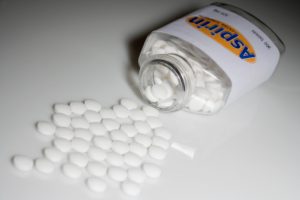 Cancer of the breast is an extremely prevalent disease. It is so common that you may already know someone battling the condition. It is estimated that about one in eight U.S. women will develop the invasive form of cancer over their lifetimes, with an estimated 252,710 new cases expected to be diagnosed in 2017 alone. Increased awareness and funding has helped improve screening and diagnosis of breast cancer, and even aided in better treatment leading to increased cancer survival rates, with deaths steadily declining. Recent studies have confirmed a link between aspirin use and breast cancer, suggesting that taking this commonly used medication at least three times per week may reduce the risk of breast cancer by up to 20 percent.

Breast cancer is often discovered by women when they feel a lump in their breast, prompting them to see their doctor. There are several types of breast cancer and these can present in a number of ways. Some are defined by hormone receptors to estrogen or progesterone, while others have specific receptors known as HER2, fueling breast cancer growth. What causes breast cancer is not quite clear, but it is suspected to be at least in part due to hormonal, lifestyle, and environmental factors. There are also several cases of inherited risk, with an estimated five to 10 percent of breast cancers being linked to gene mutations. The following are some of the risk factors for breast cancer development:

Previous research has found a link between the use of aspirin and lowered risk of breast cancer, but few investigations addressed the effect of aspirin on the risk of certain breast cancer subtypes and whether the dose of aspirin mattered. This created the backbone for the present study, which set out to determine whether a low-dose aspirin, known as “baby aspirin,” had an effect on breast cancer risk overall.
Researchers analyzed the data from 57,164 women who completed questionnaires on their use of aspirin and other non-steroidal anti-inflammatory drugs (NSAIDs). The participants were followed from 1995 to 2013. Over the course of the study, 1,457 developed invasive breast cancer. When looking at the data of aspirin use, the researchers found that women who were using low-dose aspirin at least three times a week were 16 percent less likely to develop breast cancer, compared with women who used the drug less frequently. When looking at the specific breast cancer subtypes, the research team found that the risk of developing hormone receptive positive or HER2 negative breast cancer was 20 percent lower in women taking low-dose aspirin at least three times a week.

“We [also] did not find associations with regular aspirin since this type of medication is taken sporadically for headaches or other pain, and not daily for prevention of cardiovascular disease,” said lead author Dr. Christina A. Clarke from the Cancer Prevention Institute of California.

The researchers go on to say their study was not designed to find the exact mechanism of action, but they speculate that aspirin’s anti-inflammatory properties may be the reason. Additionally, aspirin is a weak aromatase inhibitor, which happens to be the mechanism of action of more specific types of breast cancer therapy, partly explaining aspirin’s protective effect. Overall, the researchers believe that aspirin could be effective for preventing certain breast cancer, but more research is needed in this respect.