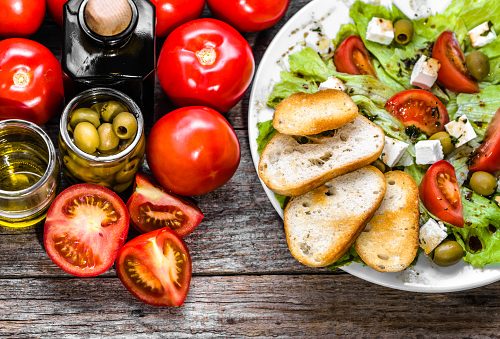 A 20-year study out of the Netherlands has found an association between following the Mediterranean diet and a decreased risk of breast cancer in postmenopausal women.

The Mediterranean diet is mostly plant-based and emphasizes vegetables, fruits, beans, olive oil, and oily fish while limiting red meat and processed foods. It has already been associated with improved heart health and better weight management, and the findings from this study suggest that it may also aid in lowering the risk of estrogen-receptor negative (ER-negative) breast cancer.

The study followed 62,573 women between the ages of 55 and 69 over the course of a 20-year period. At their enrolment, participants were made to complete an 11-page questionnaire that detailed their diet and exercise habits as well as their smoking habits and other potential risk factors for developing breast cancer.

Over the course of the 20-year period, 3,354 cases of breast cancer developed among the participants, though 1,033 were excluded from the analysis as there was either a history of cancer or the participant’s diet history was incomplete. Researchers also excluded alcohol from their analysis, despite moderate intake being part of a traditional Mediterranean diet, as it is a known risk factor for breast cancer.
Researchers concluded that if the majority of people strictly followed the Mediterranean diet, as many as 32.4 percent of ER-negative breast cancer cases could be avoided, while 2.3 percent of all breast cancer diagnoses could be avoided. The team asserts that these findings may be particularly valuable, as those with ER-negative breast cancer cannot be treated with hormone therapy and generally have a worse outcome than their peers with other forms of breast cancer.

The research team suggested that the preventative power of the Mediterranean diet could be attributed to its high fiber, antioxidant, and vitamin content, as well as its capability of reducing inflammation and oxidative stress. The clinical director of Breast Cancer Care Emma Pennery commented on these findings, stating: “Breast cancer isn’t just one disease—not all types have the same triggers and this study unpicks these complexities. We know how devastating a diagnosis is and this study adds to evidence that a healthy diet, full of ‘good’ low-saturated fats, plays a part in lowering the risk of the disease. However, it’s important to remember while lifestyle choices like eating a well-balanced diet and taking regular exercise can help reduce the risk of cancer, they don’t guarantee prevention.”

While the Mediterranean diet may play a role in reducing the risk of breast cancer in some, adhering to it is not a guaranteed way to prevent the disease. Ensure you are aware of the signs and symptoms of breast cancer and get screened regularly to minimize the risk of having the condition go undiagnosed and progress.