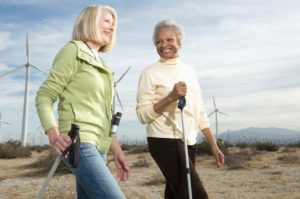 Postmenopausal women looking to manage their symptoms through means other than hormone therapy may find relief through regular exercise, according to a new study from the University of Grenada in Spain. Hot flashes and night sweats are among the most common symptoms associated with menopause, along with disruptions to mood and weight gain, and this research has found that moderate exercise can reduce their severity.

To conduct the study, researchers gathered 234 women who were at minimum one-year postmenopausal and split them into two groups based on average activity. Out of the group, 166 women were found to lead mostly sedative lifestyles, and the remaining 68 were already physically active. The team then divided the sedentary group into two sections. Participants in the first section were to continue their sedentary lifestyle, while participants in the second group were placed on a 20-week exercise program.

This program was made up of three one-hour long workouts per week that consisted of moderate aerobic exercise—like walking at a quick pace—and strength training. Women in this group also received counseling with the focus on behavioral and mood changes, as well as self-regulation strategies.

After the 20 weeks, women who participated in the exercise and counseling program were found to have lost a little weight, have improved levels of fitness, better blood pressure, and a better health-related quality of life. These women also reported higher ratings of physical and mental health, as well as experiencing less hot flashes and other symptoms that bothered them before.

Even after one year, these benefits were still seen and researchers found they were more similar to the group who had maintained a healthy and active lifestyle from the beginning than the portion of the group that had remained sedentary.
Dr. Chip Lavie from the John Ochsner Heart and Vascular Institute in New Orleans commented on the importance of exercise for postmenopausal women, stating “Improving fitness is one of the most important things that any person, including a postmenopausal woman, can do to reduce their mortality and mortality from cardiovascular disease.”

Other research has shown that less intensive exercise regimens that include 30 minutes of aerobic exercise three times weekly can also help to manage symptoms of menopause, adding merit to the idea that an active lifestyle may function as an effective alternative to hormone therapy when dealing with menopause.