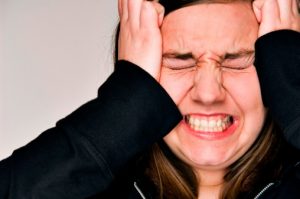 Two 2013 studies found that women who experience migraines with aura – headaches accompanied by visual disturbances – have a greater risk of heart attack and blood clots. The first study revealed that migraine with aura largely contributes to cardiovascular events and stroke, and the second study looked at women’s use of hormonal contraceptives and the risk of blood clots.

The first study looked at 27,860 women of which 1,435 suffered from migraines with aura. During a 15-year follow-up period, 1,030 cases of heart attack, stroke, or death were reported all from a cardiovascular cause.
Study author Tobias Kurth said, “After high blood pressure, migraine with aura was the second strongest single contributor to risk of heart attacks and strokes. It came ahead of diabetes, current smoking, obesity, and family history of early heart disease.”

Kurth advises that although there is increased risk, women suffering from migraines with aura should work to address other risk factors that contribute to cardiovascular disease, including physical activity levels, smoking, and blood pressure.

Women with migraines with aura were more likely to develop blood clot complications when using hormonal contraceptives, compared to the women with just migraines. “Women who have migraine with aura should be sure to include this information in their medical history and talk to their doctors about the possible higher risks of newer contraceptives, given their condition,” said study author Shivang Joshi.

A migraine is a very painful experience, which on its own can be quite debilitating. But when migraines are paired with auras, they can be more excruciating, as the condition leads to visual disturbances and increased sensitivity to light and sound. Often, these signs of migraines with aura can begin even prior to the headache itself.

Researchers are still unaware of the exact cause of migraines with aura but they believe that dopamine and serotonin – brain chemicals – play a role. Researchers believe when these two chemicals are not properly regulated it causes the immune system to overreact which floods the cell response to the blood vessels to the brain.

It’s been suspected that genetics and being overweight play a role in migraines with aura, along with environmental factors, which may trigger the migraine as well.

Symptoms of migraine with aura include:

Symptoms can occur up to 30 minutes prior to the headache and can last between five to 20 minutes.

Symptoms can be debilitating, and often people who suffer from migraine with auras take days off work or school and cannot attend social functions due to the condition.

If you suffer from migraines with aura, speak to your doctor about your condition and about treatment options.