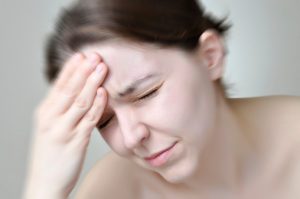 Furthermore, migraine women sufferers who take estrogen have a 30 percent greater risk for blood clot-based stroke, compared to women not taking estrogen. Together, these two risk factors present a dangerous combination for some women with regards to their risk of stroke.

The two studies focused on clot-based strokes, which account for nearly 87 percent of strokes in the U.S.

Migraines with aura have been previously found to be associated with a higher risk of stroke. One in five migraine sufferers experience auras, which are visual symptoms prior to the headache.

The 25-year-long study looked at 13,000 American adults among which 817 blood-clot stroke patients were identified. The researchers found that not only do migraine sufferers with aura have a higher risk of stroke, but they are more likely to have a blood clot form in the heart, dislodge, and travel to the brain.

Data was analyzed for over 82,000 women with some degree of migraines, and 45 percent of them were using hormone-replacement therapy.

After a three-year follow-up, the women were given a questionnaire to determine if their migraines improved or worsened. Women on hormone-replacement therapy who reported worsened migraines were 30 percent more likely to have a clot-based stroke, compared to migraine suffers who stopped hormones or never took them.

Study lead author Dr. Haseeb Rahman added, “You should not simply ignore an increasingly bad migraine. You should also tell your doctor if you’re getting migraines for the first time while on hormone-replacement therapy.”

Although migraines with auras and estrogen medications are found to be associated with an increased risk of stroke, it’s important to remember other risk factors – like smoking and high blood pressure – which can be managed to better help reduce the risk of stroke. Women should focus on reducing their risk factors for stroke in order to better protect themselves.