Home » Health News » Meditation found to be the cure for workaholism 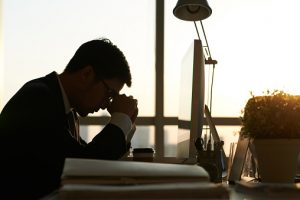 Our addictions tend to distract us from things we’d rather avoid, whether that be religiously watching our favorite show to get away from the realities of our own life or eating in excess to cope with depression. While these addictions may have a negative stigma to them, one is often overlooked: workaholism.

People who choose to work over 50 hours a week and feel the constant need to feel busy may seem productive, but in actuality, most of them do it to cope with emotional discomfort or feelings of inadequacy. So, instead of facing their issues head-on, workaholics choose to immerse themselves in their work as a distraction.

This behavioral addiction can lead to reduced life and job satisfaction, anxiety, depression, conflict and problems in the family, and low levels of work productivity. However, a new study by the University of Derby has found a cure in the form of meditation.

Researchers took 73 participants identified as workaholics and enrolled them in an eight-week mindfulness program. By the end of the intervention, symptoms of workaholism had reduced by 26 percent along with a 28 percent reduction in weekend, evening, and out-of-hours working.

“Modern working styles that often involve a greater use of remote-working technology can make it difficult for people to switch off from work. Some people become so obsessed with work that they start to neglect their wellbeing and other important areas of their life. This study shows just how important meditation can be in helping people de-stress from work, giving them more quality time to do what they enjoy,” said William Van Gordon, a lecturer in psychology at the University of Derby Online Learning and the principal investigator on the study.


The meditation program included guided sitting, walking, and working meditation, with participants, also attending a weekly two-hour lecture that guided mindfulness and encouraged discussion. Participants also received a CD of guided meditations to use at home.

A psychological assessment of all participants was done before and after the study, finding that the program was an effective treatment for workaholism. What was more impressive was that after this intervention, participants no longer fell into the diagnostic criteria for workaholism, effectively curing them.

In addition to this positive outcome, mindfulness improved work productivity. Although participants worked fewer hours than before, they still maintained their job performance. Also, improved levels of psychological distress and
job satisfaction were noted.

The researchers go on to say that meditation is a win-win solution, both for employees and their employers. Even three months after the study had concluded, it was found that the beneficial effects gained had remained.

“Some people are not aware they are addicted to work or don’t know who to turn to. Given the number of people affected, there is a need for greater awareness of workaholism along with preventative strategies.” added William.

Related: Why you should take up yoga, tai chi, and meditation