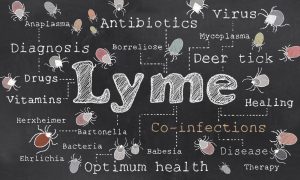 Co-inventor of the technology Alessandra Luchini concluded, “We’re looking to repeat the story again with these other diseases. Other targets for the new type of test include Chagas disease, which is infectious and caused by a parasite, and toxoplasmosis, another parasite-borne disease.”

Lyme disease signs and symptoms often resemble other ailments, so part of the Lyme disease diagnostics includes ruling out other health conditions. Your doctor will conduct a physical exam along with medical history review, and ask about your activities and hobbies to determine if you could have been exposed to a tick.

Standard testing to properly diagnose Lyme disease includes enzyme-linked immunosorbent assay (ELISA) test and a western blot test. The ELISA test checks for antibodies to B. burgdorferi, but this test isn’t always reliable. It may present a wrong diagnosis if Lyme disease is in its early stages.

The western blot test is used when the ELISA test comes back positive and used to further confirm diagnosis.

Other Lyme disease diagnostic tests include polymerase chain reaction (PCR), antigen detection, and culture testing, which directly look for the bacteria and not just the immune response to it.

With warmer weather upon us, the risk of Lyme disease increases as we spend more and more time outside – especially, in wooded, forestry areas. Vector-borne disease expert Stephen Wikel explained, “Luckily, ticks don’t fly, jump, or fall from the sky. They generally move from grass to a living host, and crawl upwards, looking for a warm, moist area to feed. Ticks also have incredible antidetection defenses. For example, their saliva is loaded with antihistamines, anticoagulants, and other inhibitors that prevent wound healing, and dampen pain and itch responses. Unfed nymphs are so small, they can be mistaken for freckles.” Continue reading…

Since ALS signs can be similar to treatable diseases, such as Lyme disease, some people think that an infection like Lyme disease can cause ALS, which stands for Amyotrophic Lateral Sclerosis. The truth is, Lyme disease does not cause ALS. Lyme disease and ALS are two separate conditions. Continue reading…