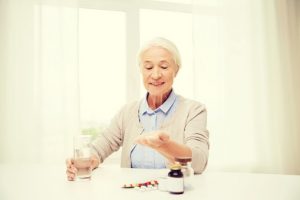 The risk of developing memory problems and cognitive dysfunction increases as we age. As some would say, this is a natural part of life. This decline in mental health should be taken seriously, however, as it can lead to lowered adherence to prescribed medication. Taking prescribed medications exactly as they’re intended to be taken is vital to the treatment of any health concern, especially cardiac issues.

New research examined the connection between low medication adherence in elderly patients and the risk factors associated with cardiovascular disease. The researchers estimate that low medication adherence accounts for approximately $300 billion in yearly healthcare costs in the U.S. and that up to 50% of patients do not take their medication as prescribed by a doctor, by either discontinuing usage or taking a lower dosage than recommended.

This is a serious concern, as low medication adherence can drastically reduce the effectiveness of medications in treating health conditions, particularly cardiovascular issues, including hypertension and hyperglycemia. Older adults make up a significant portion of patients who do not properly adhere to their medications, whether intentionally or due to decreased memory. The researchers of this study predicted that older patients with low medication adherence also displayed the risk factors for developing cardiovascular disease.

Among the participants included in the data analyzed by the researchers, 12% were categorized in the group for low medication adherence. The results were consistent with the literature in finding that the lowered adherence to prescription instructions decreased the effectiveness of the participants’ medications.

The researchers identified depression and cognitive dysfunction as risk factors for patients who are likely to fail to take their medication as prescribed. Although past attempts at introducing adherence strategies were generally unsuccessful, the researchers of this study believed that if the interventive measures were more directly targeted at the groups likely to present low medication adherence, they may be more successful. Adjustment for depressive symptoms did not change the risk factors between low medication adherence and cardiovascular disease in this study, however.

Future research will be needed to solidify these findings within the medical community and also to determine how this research can be used to generate new intervention programs, with specific focuses, and prescription medication guidelines that encourage patients to strictly follow them.

Being optimistic is associated with having a healthier heart

Tooth Loss? You May Be at a Risk of Heart Disease