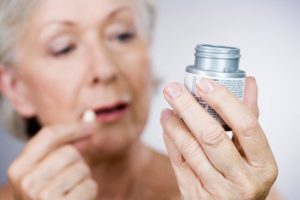 The symptoms of a stroke can last a lifetime and be very debilitating. A stroke can rob you of your ability to walk, talk, or even move. It can be very difficult to treat a stroke once it has already occurred, which is why much of the available treatment is focused on stroke prevention.

Strokes primarily happen as a result of blood clots that travel up to the brain. Once there, the clot can become lodged in important cerebral blood vessels, blocking blood supply to vital regions of the brain. If this occurs for too long, irreversible brain damage may occur.

Preventing the formation of blood clots is the primary method of prevention for strokes. Doctors recommend you take a low-dose of aspirin to lower your risk for stroke. However, according to new research, long-term daily aspirin use in the elderly leads to an increased risk of serious or fatal internal bleeding.

Long-term aspirin and other non-steroidal anti-inflammatory drugs (NSAIDs) have long been known for increasing the risk of gastrointestinal bleeding. Aspirin itself blocks certain metabolic processes in the body, helping give it its beneficial effects. But unfortunately, it also appears to block some processes known to protect the gastric lining of the stomach, leading to gastric bleeding when used in excess.

This recommendation of daily low-dose aspirin was made during clinical trials involving patient’s younger than 75, according to the researchers. The risk of bleeding beyond this age is something not well studied, and this was the focus of the research team.

The study looked deeper into long-term aspirin use in the elderly. They analyzed medical records from more than 3,000 patients who had a stroke or heart attack and have been taking the medication for years. Half of the participants were 75 or older and followed for 10 years.

Over this time period, 314 patients were admitted to the hospital for bleeding.

The researchers found that the risk of these bleeding incidents increased shapely with age. Patients under 65 years old had an annual hospital admission rate of 1.5 percent, patients between the ages of 75 and 84 saw a rate of 3.5 percent, and those over 85 years had a rate of 5 percent.

“We have known for some time that aspirin increases the risk of bleeding in elderly patients. But our study gives us a much clearer understanding of the size of the increased risk and the severity of the consequences,” said Peter Rothwell from the University of Oxford, who led the study.

The researchers suggest that a proton pump inhibitor(PPI)—a common treatment for heartburn—could help mitigate some of this bleeding risk, but its use also brings along additional complications. Previous studies into PPI use in combination with aspirin proved to reduce bleeding in the upper gastrointestinal tract by up to 90 percent.

The researchers recommend this combination therapy for elderly patients as well as a full review of patient status every three to five years.

Stroke risk in men and women: Know the difference