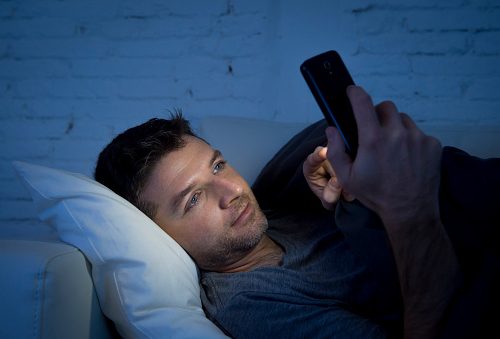 As children, we snuck flashlights under the covers so we could read after our parents told us to go to bed. These days, people of all ages have traded in their flashlights for the light coming off their phone screens. However, more and more people are starting to complain about sleep dysfunction than ever before.

New research from the University of Houston College has found that the blue light given off by cell phones, laptops, tablets, TVs, and other screens is actually affecting the quality of your sleep. The study took the form of an experiment, consisting of 22 participants between the ages of 17 and 42. The participants wore glasses that blocked blue light waves for three hours before they went to sleep over the course of two weeks. They maintained the same usage of their electronic devices as before.

The results of the experiment showed a 58 percent increase in the melatonin levels of the participants who wore the glasses before bed compared to those who didn’t. Melatonin is a naturally occurring chemical in the brain that signals when it is time to sleep. The increase caused by wearing the glasses was even greater than if the participants had simply taken over the counter melatonin supplements instead.

The participants also reported that their quality of sleep improved over the course of the two weeks. They slept better, fell asleep faster, and had an overall increase in the time that they slept of 24 minutes. It’s clear that the blue lights given off by many electronic devices have detrimental effects on our quality of, and our ability to, sleep. These lights boost levels of alertness and deregulate our internal clock, which tells us when it is time to sleep.

It is interesting to note that many technology developers have begun including settings that allow users to change the light on their device. This goes for laptops, tablets, and cell phones. There is often an option to change the light coloring from blue- to yellow-toned to protect eyesight.

The results from this study could lead to new regulations for technology that includes eye protection settings. In the meantime, if this option is offered on your device, use it. If not, avoid your screen a couple of hours before bed.

Related: Cell Phones – Do They Really Damage Your Health?