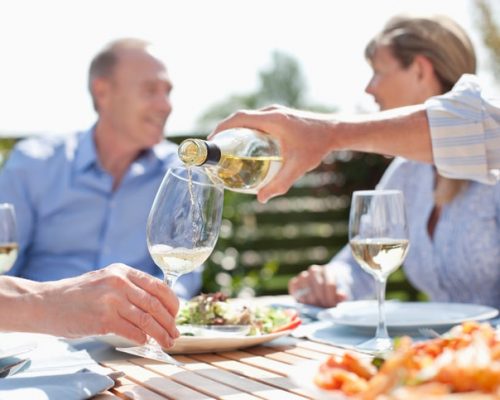 According to new research, whether you are someone who avoids drinking alcohol entirely or drink wine like it’s water, you have a higher risk of developing dementia than people who have only the occasional brew. The study followed 9,087 adults over the course of the (on average) 23-year follow up period.

The researchers assessed alcohol consumption five times throughout the study, which was performed between 1985 and 2004. In addition, they analyzed data from questionnaires on alcohol consumption and medical records of patients suffering from alcohol-related diseases between 1991 and 2017.

They used a standardized measurement of alcohol percentage to quantify a single unit of alcohol as eight grams of pure alcohol. By this standard, a typical glass of wine would contain around two units of alcohol and a draught beer between one and three units. Using this logic, the researchers defined light to moderate drinkers as consuming one to 14 units per week (less than seven drinks) and heavy drinkers as consuming more than 14 units per week.

By the end of the study, 397 participants had developed dementia, generally around the age of 76. When compared to the drinkers in the light to moderate category, participants who abstained from alcohol consumption had a 47 percent higher chance of developing dementia. For those in the heavy drinking group, each seven-unit increase (on top of the baseline of 14 units of alcohol) was related to a 17 percent higher risk of developing dementia.

They also noted that people who shifted their drinking habits after reaching middle age suffered from an increased risk of dementia, as well. The lowest risk group were those who consistently remained light to moderate drinkers throughout early adulthood and through middle age.

The researchers behind the study believe that nutritional deficits and the long-term effects of alcohol on the brain are behind the increased risk in heavy drinkers. There are also comorbidities among people who heavily consume alcohol, including diabetes, high blood pressure, and stroke. Diabetes is also common among people who abstain from alcohol, as is heart disease. The researchers also believe that the increase risk in abstainers is partially explained by those who do not drink due to alcoholism or addiction, who may suffer from a higher risk of dementia due to years of misuse in the past.

“Findings on abstainers should not motivate people who do not drink to start drinking alcohol due to the adverse effects of alcohol on mortality, cirrhosis of the liver and cancer,” said lead study author Severine Sabia. “In addition, given the detrimental effect of alcohol for several health outcomes, people who drink in an excessive manner should be encouraged to reduce their alcohol consumption.”

The researchers also advise that in many places around the world the standard for what qualifies as “heavy drinking” is far too high and that the dangerous effects of alcohol misuse begin at a much lower intake quantity. These results lend themselves to lowering the recommendations for safe alcohol consumption.